They are Laughing in Our Faces

The UN’s COP26 is a grotesque and decadent spectacle.

We are witnessing Versailles levels of extravagance and hypocrisy. From every corner of the globe, the super-rich, the powerful and the full of puffed-up virtue are gathered in Glasgow to pontificate to the rest of us about how much we are harming the planet with all our waste and hubris.

They’ve arrived in their fleets of private jets to bemoan the scourge of air-industry emissions. They are tucking in to five-star meals in between wondering out loud if the little people should eat less meat. They’ll rest their weary, virtuous heads on plump, silk pillows after long days of discussing how to rein in the material aspirations of the masses.

It is perhaps the most nauseating display of oligarchical conceit of recent times.

One by one these elitists are competing to heighten the hysteria … “one minute to midnight” … “code red for the planet”… “an existential threat to humanity”… “greatest moral challenge of our time” … “last best hope for the world” … and on … and on … and on.

Hundreds of highly-paid PR flacks in dozens of countries have sweated out these histrionic phrases. The world’s billionaires and high potentates have then humbly volunteered to deliver the gold-plated words personally to Glasgow by private jet and chauffeured limousine.  And to be seen there.

But why are 400 private jets parked at airports serving Glasgow? Honestly? Why not deliver the words by email – or even by video if the media need visuals?  What do they achieve by their swaggering  physical presence? After all, everybody knows that this entire convention is a pretentious charade.

Nobody at the convention hall in Glasgow really needs to be convinced that climate action is a good thing. The hall is an echo-chamber of like-minded enthusiasts.

A committee of 25,000 is never going to make any worthwhile decision that was not pre-approved long before the convention began.

It is all theatre. But it is a very expensive performance, and – with Scotland reporting 400 new infections each day – it is a potentially dangerous performance for over 100 countries. All attendees are exempted from Scotland’s vaccine passport scheme. (“All animals are equal but some are more equal than others” – Orwell).

The private jets alone will blast 13,000 tonnes of CO2 into the atmosphere, and their ostentatious presence has  been branded “rank climate hypocrisy” and the “nadir of carbon inequality”. But they are no more than the visible tip of an iceberg. Many of their mega-rich owners – Bloomberg, Bejos, Fink, Gates, Soros, Schwab, the Rockefellers, the Rothschilds – are pouring many more billions into lobbying governments everywhere for their favoured climate policies.

There are literally tens of thousands of professional climate activists working on a full-time basis and drawing wages funded by these “philanthropists”. They make up the bulk of the non-delegates at the Glasgow convention. What hope does common sense or moderation have in the face of such an army of propagandists?

Francis Menton believes that, on balance, it’s a good thing we have these annual COPs, saying:

“I can think of no other comparable activities that put on such dramatic and widely-viewed display the immeasurable foolishness and hubris of our political overlords.“

Menton points out that no less than 25 COPs have previously ordered the world to reduce its omissions. They succeeded in delivering the dismal track record shown in this graph: 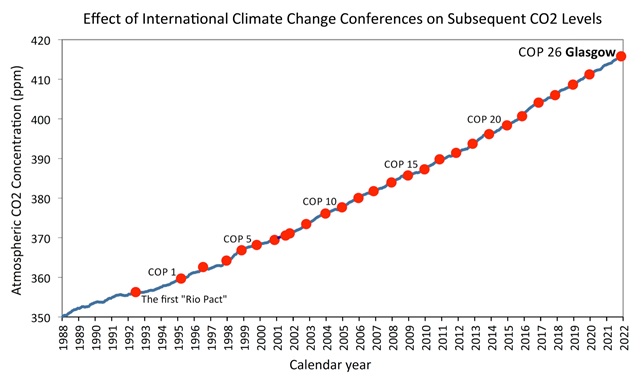 While every smug and sanctimonious member of the climate elite can readily churn out 10,000 words about the benefits of “net zero carbon by 2050”, none ever seem to mention the costs. Or who is to pay those costs. [Clue: it’s not them.]

Both New Zealand and UK governments have released modelling as to the likely costs. While admitting that “nobody knows”, the models suggest a figure of about US$11,000 per household per year. Contrast this with the 68% of Americans who tell opinion surveyors that they are not prepared to pay more than $10 per month to ameliorate climate change.

Where is the self-awareness of elites who instruct us to “do what we say not what we do”:

Closer to home, the New Zealand Green Party MPs fly more kilometres than the MPs of any other party. Minister James Shaw flew no less than 14 bureaucrats to Glasgow (in business class) for no known benefits to taxpayers – shouldering aside hapless MIQ applicants who have been queueing for months to return to their homeland.

I conclude as I began with Spiked:

This is a movement that allows the descendants of incredibly wealthy banking families to tell the rest of us to wear a cardie rather than turn on the central heating and which invites literal princes to make sad faces about all the flying and meat-eating the oiks are engaging in.

I said it was a modern version of Versailles, but actually it’s worse than that. At least daft bint Marie Antoinette wanted the lower orders to eat cake (she just didn’t realise they didn’t have any). This new lot actively campaigns against the consumption of the 21st-century equivalent of cake – meat, heat, easy travel. ‘Don’t let them eat cake’ is the cry of the eco-aristocrat.