Time for More Action on FASD 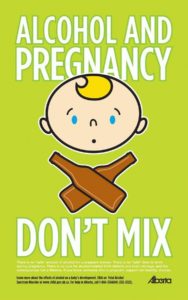 Last month the New Zealand Medical Journal published a Growing Up in New Zealand study outlining the disturbing finding that almost a quarter of women continued to drink alcohol during their first three months of pregnancy, despite knowing they were pregnant.

As a result of making that irresponsible choice to drink while pregnant, their children may be born with irreversible brain damage and other serious disabilities that make it impossible to lead a ‘normal’ life.

When a pregnant woman drinks alcohol, it is quickly absorbed into her bloodstream, crossing the placenta, and reaching the baby. Since the foetus breaks down alcohol more slowly, higher concentrations in the blood are retained for longer, which can permanently damage not only the growing baby, but the placenta as well.

By the third week of pregnancy, alcohol consumption can have affected the development of the baby’s heart and central nervous system – by the end of the first two months, all of the baby’s major organs, the digestive, urinary and circulatory systems, along with the eyes, nose and mouth, and by 12 weeks, the skeleton and limbs.

Alcohol can also have a profound impact on the baby’s brain throughout the whole pregnancy as, when it metabolises, it releases substances that disrupt the proper establishment of healthy neural networks.

The lifelong physical, behavioural, mental and intellectual disabilities that can result from the exposure of a foetus to alcohol are known as Fetal Alcohol Spectrum Disorder (FASD). As well as abnormal facial features, small head size, shorter-than-average height, low body weight, vision or hearing impairment, and problems with the heart, kidneys, or bones, such children can have poor memory and coordination, attention difficulties, learning disabilities, speech and language delays, low IQ, poor judgment skills, as well as severe hyperactivity and behavioural issues.

While the links between birth defects and alcohol consumption during pregnancy were identified by scientists nearly 50 years ago, not only does New Zealand still have no FASD prevalence data, but according to the Ministry of Health, the true situation is likely to be worse than reported, since many women will not admit their drinking habits, and many, who don’t know they’re pregnant, continue consuming alcohol.

Overall, in spite of the clear advice from the Ministry of Health that women who are pregnant or are planning to get pregnant should not drink alcohol, the evidence suggests that one in two New Zealand pregnancies are alcohol exposed, with unplanned pregnancies at the greatest risk.

Internationally it’s estimated that up to 5 percent of people suffer from FASD. With around 60,000 live births a year, that means a staggering 3,000 New Zealand children could be born with FASD every year.

Alcohol also increases the risk of babies being born prematurely, and it contributes to Sudden Infant Death Syndrome, with such babies more than three times as likely to have had exposure to binge drinking prenatally.

In general, baby deaths during the first year that are associated with FASD are due mainly to malformations of the central nervous system, congenital cardiac abnormalities, sepsis, kidney malformations, and cancer.

US research shows that in later life the attempted suicide rate for FASD sufferers is an astounding 22 percent, compared to the general population rate of 3 percent. This is most likely the result of behavioural issues and not “fitting in” to mainstream society. It is similar to estimates that young people with FASD are 19 times more likely to get into trouble with the law than others.

At a 2017 forum in Whangarei on the links between FASD and the justice system, Judge Catherine Crawford of West Australia, explained: “Children adversely affected by neuro-disability, resulting from alcohol exposure during pregnancy, are at an increased risk of committing crime or being a victim of crime. Such outcomes are doomed to be repeated when there is systematic failure to identify and appropriately accommodate their disability into adulthood.”

She spent a day in the local Youth Court, and reported that six of the 19 young defendants had been diagnosed with FASD. The actual incidence is likely to have been much higher.

Writing in the  Youth Court newsletter in 2017 on FASD and the youth justice system, Kesia Sherwood of Otago University’s Faculty of Law, recommended prioritising the development of a comprehensive diagnostic service for FASD throughout New Zealand, since a diagnosis represents the first step towards early intervention.

She outlined how mothers of children affected by FASD experience an overwhelming feeling of relief, rather than shame or stigma, on finding out what is causing the “indescribable challenges” presented by their child. And she explained that while current disability laws provide support for disabled children, anyone with an IQ of over 70 is excluded. This means that many FASD sufferers, who may be “mentally disordered” and unable to cope, but have higher IQs, essentially have no support.

In her article, Kesia also identified a major problem facing society – the criminal justice system is based on people being able to learn from their mistakes and acknowledge the impact of their offending on victims and society in general, yet many FASD sufferers do not have the capacity to learn from their mistakes nor to acknowledge the consequences of their offending.

A well-known case of an FASD sufferer, who became a victim of the criminal justice system, is, of course, Teina Pora, who as a seventeen-year-old was convicted of the 1992 rape and murder of Susan Burdett. In spite of two trials, two guilty verdicts, and spending 21 years in jail, the conviction was quashed in 2015 by the Privy Council: “The combination of Pora’s frequently contradictory and often implausible confessions and the recent diagnosis of his FASD leads to only one possible conclusion and that is that the reliance on his confessions gives rise to a risk of a miscarriage of justice.”

When asked, if he was innocent why he confessed to the murder, Teina Pora said, “ I’ve never met Susan, I didn’t know her from a bar of soap… It was like getting interrogated … I just said whatever they were saying. I just said ‘yes’ and said ‘no’. I thought no was yes and yes was no back then. I just went along with it.”

Twenty-one years behind bars at a cost of over $300 a day, plus the $3.5 million given in compensation, amounts to over $5.5 million in the cost of one mis-diagnosed case of FASD.

While this is indeed an extraordinary incident, it does nevertheless expose the plight of those who are unable to cope because their mothers chose to drink alcohol while pregnant.

According to the Ministry of Health, FASD affects about 50 percent of children and young people in State care. This is similar to the situation in Canada for Indigenous children.

This week’s NZCPR Guest Commentator is Brian Giesbrecht, a retired Canadian Judge with over 30 years of experience in the provincial Court system, who has observed first-hand the devastating consequences of FASD. He explains that in Canada, at least half of the Indigenous children in State care are born with irreversible brain damage caused by mothers “who placed their own selfish drinking and drug taking ahead of their duties as parents”:

“The finding, that Indigenous child welfare wards are doing poorly as adults, will be met by cries of outrage from Indigenous advocates. Governments and agencies will be blamed. The public will be scolded. Demands will be made to reorganize and Indigenize child welfare services, increase government funding, again, and hold yet more inquiries.

“Put aside blaming the government, child welfare agencies, colonialism and residential schools, what we have is a fairly straightforward problem. Blame instead irresponsible parents drinking their children’s future away. There are no positive results to come from outraged blaming of others.

“Society’s indignant and self-righteous people continually give irresponsible parents exactly the excuse they need to keep on failing their children.”

So there we have it – in Canada, which recognised the problem of FASD almost 20 years ago, an experienced former Judge, who has heard every excuse under the sun, and has seen the dark side of every aspect of the welfare and criminal justice systems believes that parents are to blame for this serious problem and must be held accountable.

Here in New Zealand some professionals take a different view. A leading paediatrician in the area, Zoe McLaren says “we need to stop laying responsibility for FASD at the feet of the women”. She believes that women’s partners, health providers, alcohol marketers and society all carry responsibility for ensuring women do not drink alcohol while pregnant. In particular, she believes, “Health professionals and other service providers need to be supported to appropriately ask all women about alcohol use and advise women not drinking any alcohol is safest.”

With surveys showing that not all healthcare professionals have been up to the task of confronting women about the risk to their baby from alcohol, change is clearly needed.

The safety of a child should be paramount, and mothers must be made aware of the fact that this life-threatening FASD problem is preventable – as long as they understand that because everyone metabolises things differently, there is no safe threshold for drinking alcohol during pregnancy.

It’s the same with smoking, although the health risks to a baby are better recognised. Since smoking a single marijuana joint delivers the same lung cancer risk as smoking 20 cigarettes, any woman who smokes cannabis during her pregnancy is deliberately passing carcinogenic chemicals through the placenta and into her baby. It’s the same with all other drugs – if a pregnant mother gets high, so too does her baby, with potentially permanent damaging consequences.

In other words, a loud and clear message should be sent out to women that they should not drink, smoke, or take drugs during pregnancy.

The cost of FASD to New Zealand is massive. In 2015 the Ministry of Health estimated the lifelong social and behavioural costs associated with the health system, mental health, substance abuse treatment services, welfare, the long-term care of individuals with intellectual and physical disabilities, and the criminal justice system, to be almost $700 million a year.

In addition, the annual loss of productivity from decreased participation in the workforce as a result of FASD, was assessed at up to $200 million.

If the ‘unseen costs’ associated with the social, health and financial impacts on family members, including alternative education, legal assistance, and medical assessments and interventions, the total burden of FASD on the New Zealand economy is likely to be in the region of $1 billion a year.

However, these figures are based on 2008 dollars and use the most conservative estimate of 1 percent of the population suffering from FASD. If the higher 5 percent estimate is used, the cost rises to over $5 billion a year.

Prime Minister Jacinda Ardern is well aware of the seriousness of this problem and the huge burden it places on society. In 2014, she said, “I feel quite strongly about this… We need to develop and implement an FASD plan that focuses on prevention, diagnosis, and a framework for support across health, social services and education.”

As the Prime Minister – and a new mother – she is perfectly positioned to make a real difference, especially with the first step, prevention.

In the US where avoiding alcohol has been the official recommendation since 1989, drinking during pregnancy is reported to have declined from around 21 percent to 12 percent.

While a high profile prevention programme will not reach everyone it has the potential to profoundly reduce the risk of FASD for 3,000 children a year – isn’t that a goal worth pursuing?

Do you believe enough is being done to warn New Zealand women about the dangers of drinking alcohol while pregnant?