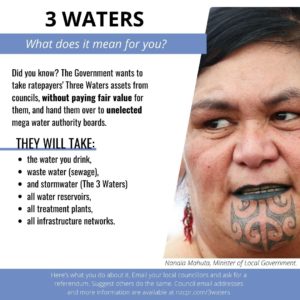 The latest political opinion poll confirms support for Jacinda Ardern’s Labour Government is sliding. According to Colmar Brunton, Labour has fallen 3 points to 43 percent, National has dropped 3 to 26 percent, ACT has risen 5 to 14 percent, the Greens and the Maori Party are steady on 8 percent and 2 percent respectively, and NZ First is up 2 points to 3 percent.

Is Labour’s slide in the polls the result of the public seeing through their PR spin to their record of dysfunction, realising they are a government that’s strong on rhetoric but abysmal on delivery?

Or are they waking up to the fact that Labour is subjecting New Zealanders to an “unfortunate experiment”, leading us down a path to disunity and racial division without our consent?

Have they realised that He Puapua – Labour’s secret 20-year plan to turn the clock back 200 years to tribal rule – was deliberately withheld from voters at the election and is now being imposed without a mandate?

Perhaps the public are beginning to understand that the Ardern Labour Party cannot be trusted –that a ruthless separatist agenda lies behind the veil of smiles and pleasantries, that will undermine New Zealand democracy and our Kiwi way of life.

Two proposed law changes reveal Labour’s radical agenda: firstly, the introduction of apartheid into our health system, and secondly, the transfer of control of the country’s freshwater, wastewater and stormwater services to iwi.

The fact that Labour is intent on restructuring the entire health system during a pandemic reveals their objective is not to govern in the best interests of New Zealand, but to ensure the race-based health service being demanded by iwi leaders is delivered.

Instead of one health system for everyone, run by local communities to meet local needs, Jacinda Ardern wants us segregated into an apartheid system run from Wellington. Those of Maori descent will be directed to a special Maori Health Authority, which will have the right of veto over the entire health system, with everyone else directed to the other Agency.

And even though the new agencies are still in the planning stage, questions about impartiality are already being raised following Cabinet’s decision to appoint Nanaia Mahuta’s sister as the co-chair of the new Maori Authority.

This same agenda for tribal control is driving the Three Waters reform. While councils were asked to provide feedback to the Minister of Local Government Nanaia Mahuta by the end of September, many requested more time – councils wanted a pause in the process.

But the Minister is not listening.

When asked in Parliament on Tuesday, “Does she stand by her comments on Three Waters reforms that ‘Pausing the reform discussion will not help to respond to the significant challenges facing councils’; if so, why?” Minister Mahuta replied, “Yes, because the case for change is compelling, well understood, and needs to be addressed. Doing nothing is simply not an option.”

Her statement fails the fact-check test.

The Minister claims there will be massive cost savings for ratepayers under her proposal to transfer the water infrastructure of the country’s 67 local authorities to four water entities co-governed by iwi, yet virtually all of the reports reviewing the Scottish model upon which her reforms are based, show the savings are overstated, and the reforms will not deliver on the promises being made.

In his latest assessment, financial analyst and former local body councillor Frank Newman explains, “The Water Industry Commission for Scotland report assumes the four new water entities will significantly reduce operating costs, and deliver lower-cost capital spending. They assume there is ‘an efficiency gap’ that will be closed within 10 years and result in a 53% saving in annual operating costs from year 10. They qualify this by saying: ‘The scope for cost reduction will, however, require a commitment to a full package of reform: investment, financial freedom, clarity in objective setting, empowered regulation, and incentivised management’.”

Frank outlines why these savings will never materialise under Nanaia Mahuta’s separatist model: “New Zealand is not the UK and UK water services do not have an indigenous 50:50 ‘partnership’ co-management model that is the foundation stone of our Three Waters reform. Rather than having incentivised management, which is required to achieve efficiencies, management of the four entities is more likely to be disincentivised by having to meet the unknown costs of the cultural and spiritual considerations embedded within the governance and management structures.

“We know from other co-governance arrangements that iwi act in the best interests of iwi. Reality would suggest the entities will be burdened with additional costs that have not been factored into the Scottish model. How much those additional costs will be is impossible to quantify as no other country has passed control of essential water infrastructure to a monopoly controlled by a vested interest group claiming to represent just 16.7% of the population.”

While the need for an upgrade of New Zealand’s water services was first proposed in 2017 following an inquiry into the Havelock North water supply tragedy, like the health reforms, the plan for Maori control only emerged after the 2020 election, when Labour gained an absolute majority – and totalitarian power.

Under Three Waters, each of the four water entities would be controlled by a 12-member governance board, six members representing up to 22 councils in their area, with local iwi holding the other six positions – and an effective right of veto.

This week’s NZCPR Guest Commentator Gary Judd QC has examined the Cabinet paper in which Minister Mahuta outlines her plan for the involvement of iwi:

“The Cabinet paper contains no principled basis for making the provision of the three Waters services subservient to iwi/Māori. Its impenetrable language is a smokescreen for a political determination to put these assets under effective iwi/Māori governance and control by the structure the legislation will create.

“The Minister’s aims are clearly revealed by paragraph 26 where she says, ‘my reforms of the three Waters system provide the opportunity for a step change in the way iwi/Māori rights and interests are recognised throughout the system.’

“The three waters proposal has been deliberately designed to give iwi/Māori the predominating governance influence. In addition, it was agreed that the water services entity would fund and support capability and capacity of mana whenua within an entity’s boundary to participate in relation to three waters service delivery. Bear in mind that getting a return from an asset is a right attributable to an owner. Therefore, the proposal would confer on iwi/Maori, but no one else, a direct attribute of ownership.”

Gary Judd also debunks the Minister’s claims that councils will retain ownership of their water infrastructure: “Councils now own drinking water, wastewater and stormwater assets, directly or indirectly. That will change. Only iwi/Māori will have ownership rights. Directly in some respects, indirectly in others. Local authorities will have none.

“The government whilst claiming that the new entities would be publicly owned did not say how. Under pressure, by the end of June the Minister, Nanaia Mahuta, was saying they would be owned by local authorities, by being listed as owners in the legislation. As the proposal deprives local authorities of all the rights of ownership, this ‘ownership’ is a fiction. It is ‘spin’ on a grand scale. Listing in the legislation does not confer ownership if it does not confer ownership rights.”

In reality, Three Waters will result in a massive transfer of power: councils will receive no shares in the new entities in return for their assets, nor fair compensation, and they will end up with little or no representation on the governing boards, and therefore little or no influence over the assets, whereas iwi will gain ownership rights and veto powers.

Under the proposed arrangements it is inevitable that local iwi will claim – through some imagined spiritual connection – that they own the water, and the iwi-controlled boards will grant water royalties. Nanaia Mahuta’s Three Water reforms will give private sector iwi corporations what they have long coveted – royalty payments in perpetuity every time a Kiwi tap is turned on.

Despite most councils rejecting Three Waters, Minister Mahuta is now preparing to use the heavy hand of the State to confiscate their water assets and infrastructure through legislation.

She claims the reforms are needed because the upgrade in standards being planned by the Government’s new water regulator Taumata Arowai will be difficult for councils to fund. But a June 2020 Cabinet paper suggested a range of water infrastructure funding options including “government bonds” – to provide councils with funding at rates closer to the Crown cost of borrowing, rather than the higher rates available through the Local Government Funding Agency.

Instead of confiscating water infrastructure, the logical answer is for the Government to apply the same shared funding model they use for roading infrastructure.

Furthermore, the Government’s exemption from paying rates for the land it owns should end. If they paid their ‘fair share’, those councils where Government land holding is high – up to almost 90 percent in some areas – would be far better positioned to fund water infrastructure upgrades.

The speed with which He Puapua is being enacted – to implement the elitist agenda of tribal control promoted by Labour’s Maori Caucus – is alarming.

The loss of freedom when democracy is undermined by tribalism should never be underestimated. Whether through democratically elected Health Boards or Councils, having local representatives sorting out local needs, is vastly superior to relying on face-less centralised bureaucracies that care little about the concerns of distant communities.

It is extremely disappointing that media scrutiny of the Government’s separatist agenda is virtually non-existent. Labour has effectively bought media silence through a $55 million Public Interest Journalism Fund, that’s only available to those who promote the Treaty partnership fiction that underpins demands for tribal rule. Those accepting government inducements are complicit in this deceit. Public trust will not be restored until media turn their back on State funding.

What this means is that exposing Labour’s separatist plan to replace democracy with tribal rule depends on us, the public. We must do everything we can to help other Kiwis understand what’s going on, and to let them know that Labour should be feared, not trusted.

While readers of these NZCPR Weekly newsletters are doing a brilliant job of informing others through emails, delivering fliers, sharing our social media memes – see our People’s Press page HERE – and contacting councillors, it’s now time to turn our focus onto politicians.

The email addresses of all MPs can be found on the NZCPR website HERE. Government Ministers and MPs must be urged to drop the reforms and stop dividing our country by race. And opposition MPs should be urged to put a stake in the ground and pledge to repeal race-based laws once they are elected to office.

During last year’s election, Jacinda Ardern did not campaign on Maori control of health services nor of three waters. He Puapua was kept hidden. Labour has no mandate for what they are now doing, and should be held to account.

*What do you believe is the real motivation behind the Three Waters reform: to improve water services, or give control of water to Maori?