Judith Bergman, a columnist, lawyer and political analyst, is a Distinguished Senior Fellow at the Gatestone Institute. 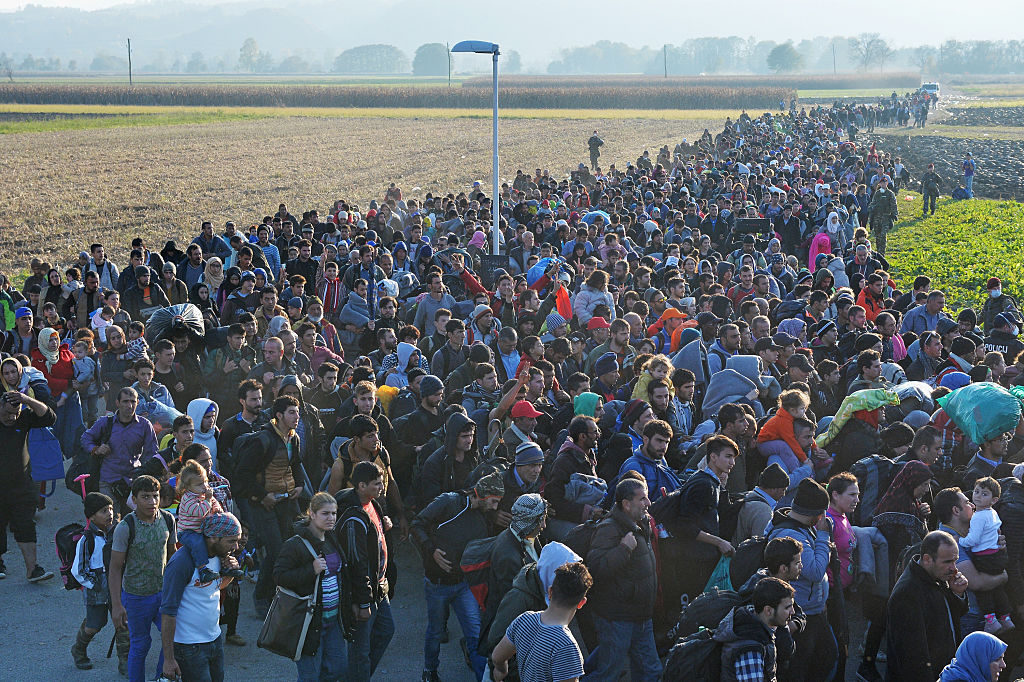 RIGONCE, SLOVENIA – OCTOBER 26: Migrants are escorted by police through fields towards a holding camp in the village of Dobova on October 26, 2015 in Rigonce, Slovenia. Thousands of migrants marched across the border between Croatia into Slovenia as authorities intensify their efforts to attempt to cope with Europe’s largest migration of people since World War II. (Photo by Jeff J Mitchell/Getty Images)

The United Nations, in a non-binding agreement that almost all UN member states will sign at a ceremony in Morocco in early December, is making migration a human right.

The finalized text of the agreement, the Global Compact for Safe, Orderly and Regular Migration, although officially non-binding, “puts migration firmly on the global agenda. It will be a point of reference for years to come and induce real change on the ground…” according to Jürg Lauber, the representative of Switzerland to the UN — who led the work on the agreement together with the representative of Mexico.

One immediate irony, of course, is that few countries have entry requirements as restrictive as Switzerland’s. If one wishes to stay more than three months, not only is a “residence permit” required, but, “In an effort to limit immigration from non-EU/EFTA countries, Swiss authorities impose strict annual limitations on the number of residence and work permits granted to foreigners.”

These hard-to-come-by-residencies have, unsurprisingly, become a source of income as “[r]ich foreigners ‘buy’ Swiss residency.”

The UN agreement, on the other hand, notes:

“Refugees and migrants are entitled to the same universal human rights and fundamental freedoms, which must be respected, protected and fulfilled at all times.” (Preamble, section 4)

It cannot be stressed enough that this agreement is not about refugees fleeing persecution, or their rights to protection under international law. Instead, the agreement propagates the radical idea that migration — for any reason — is something that needs to be promoted, enabled and protected. Almost all UN member states, except for the United States, Austria, Australia, Croatia, Hungary and possibly also the Czech Republic and Poland, are expected to sign it.

The UN has denied that migration is being made into a human right. “The question of whether this is an invidious way to start promoting a ‘human right to migrate’ is not correct. It’s not in the text; there’s no sinister project to advance that,” Louise Arbour, the UN special representative for international migration, recently said.

The agreement is divided into 23 objectives toward which the signatories apparently wish to work. Objective number three, for instance, envisions the promotion and enabling of migration through a number of means. Signatory states commit to:

States, in other words, are not only supposed to open their borders for the migrants of the world, but should also help them pick and choose their future country by providing them with comprehensive information about each country they may wish to settle in.

The service level envisioned to facilitate more migration is also high. Countries are called upon to:

“Establish open and accessible information points along relevant migration routes that can refer migrants to child-sensitive and gender-responsive support and counselling, offer opportunities to communicate with consular representatives of the country of origin, and make available relevant information, including on human rights and fundamental freedoms, appropriate protection and assistance, options and pathways for regular migration, and possibilities for return, in a language the person concerned understands.”

Once migrants have arrived at their chosen destination, the signatory countries commit to:

“Provide newly arrived migrants with targeted, gender-responsive, child-sensitive, accessible and comprehensive information and legal guidance on their rights and obligations, including on compliance with national and local laws, obtaining of work and resident permits, status adjustments, registration with authorities, access to justice to file complaints about rights violations, as well as on access to basic services.”

Migrants are, evidently, citizens of a new world, in which all countries must spring to the assistance of anyone who has chosen to travel and reside there for whatever reason. Borders may exist in theory, but the UN — comprising nearly all governments of the world — is working hard at making them disappear in practice.

Migrants, according to the agreement, must also be “empowered to realize full inclusion and social cohesion” in their new countries (objective 16). This means, among other things, that countries must:

“Promote mutual respect for the cultures, traditions and customs of communities of destination and of migrants by exchanging and implementing best practices on integration policies, programmes and activities, including on ways to promote acceptance of diversity and facilitate social cohesion and inclusion.”

All cultures are equal and must be equally respected. Presumably, this means that, for example, the tradition of female genital mutilation (FGM), which almost all Somali women experience in Somalia, must be acknowledged in London and Paris as deserving of “mutual respect” in the same way that it would back in Mogadishu.

The agreement goes on to enumerate the work that states must initiate to accommodate migrants. “National… policy goals regarding the inclusion of migrants in societies, including on labour market integration, family reunification, education, non-discrimination and health” should be developed. In addition, the host country should facilitate “access to decent work and employment for which they are most qualified, in accordance with local and national labour market demands and skills supply.”

In other words, newly arrived migrants in, say, Europe, should have the same, or at least very similar, rights to education, the labor market and health care, as Europeans, who have worked hard and paid taxes for half a century to gain access to those very same things. Europeans, of course, will have to pay for all of this out of their tax money.

The authors of the agreement evidently do not expect it to go down all that well with their populations. An agreement to facilitate mass migration into primarily Western countries from the rest of the world (there is no migration to speak of in the opposite direction) may prove a bit much for people in the West. The agreement therefore clearly signals that any disagreement with the agenda will not be accepted and that the signatory states will work to dispel “misleading narratives that generate negative perceptions of migrants.”

To make this objective a reality, the signatory states first commit to:

“Promote independent, objective and quality reporting of media outlets, including internet-based information, including by sensitizing and educating media professionals on migration-related issues and terminology, investing in ethical reporting standards and advertising, and stopping allocation of public funding or material support to media outlets that systematically promote intolerance, xenophobia, racism and other forms of discrimination towards migrants, in full respect for the freedom of the media.” (Objective 17)

This is Orwell on steroids. Almost all UN member states will sign an agreement that says media outlets that disagree with government policies will not be eligible for public funding? On top of this, the agreement claims, bizarrely, that it is being written “in full respect for the freedom of the media”, as if that is going to make anyone actually believe it.

Second, the signatory states commit to:

“… eliminate all forms of discrimination, condemn and counter expressions, acts and manifestations of racism, racial discrimination, violence, xenophobia and related intolerance against all migrants in conformity with international human rights law.” (Objective 17)

The agreement, conveniently, offers no definitions of what constitutes “racism” or “xenophobia” in this context. What, for example, is “related intolerance”? Is criticism of UN migration policies, for instance, “intolerance”?

Originally, all UN member states, minus the United States, had approved the finalized text of the agreement and appeared ready to sign it in December. Recently, however, more states have announced that they are withdrawing from the agreement.

In July, Hungary withdrew from the agreement. Hungarian Foreign Minister Peter Szijjarto described it as “entirely against Hungary’s security interests,” and added:

“This pact poses a threat to the world from the aspect that it could inspire millions [of migrants]. Its main premise is that migration is a good and inevitable phenomenon. We consider migration a bad process, which has extremely serious security implications.”

In July, Australia also indicated that it would withdraw from the agreement, at least in its present form. According to Minister for Home Affairs Peter Dutton:

In November, both the Czech Republic, and Poland announced that they were very likely to withdraw from the agreement and Croatian President Kolinda Grabar-Kitarovic wrote in a statement that she would not be signing the agreement. “Our sovereign principles on securing our borders and controlling migration flows are absolutely the priority for us”, said Polish Prime Minister Mateusz Morawiecki.

Also just this month, Austria announced that it also would not be signing the agreement. “We view some points of the migration pact very critically, such as the mixing up of seeking protection with labour migration,” Austrian Chancellor Sebastian Kurz said.

The European Union immediately criticized Austria’s decision. “We regret the decision that the Austrian government has taken. We continue to believe that migration is a global challenge where only global solutions and global responsibility sharing will bring results” said an unnamed spokeswoman from the European Commission.

This article is reprinted with permission from the Gatestone Institute and was originally published HERE.