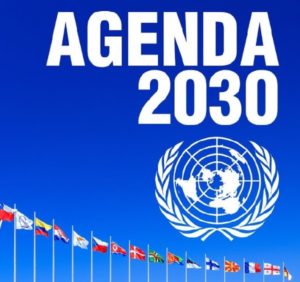 Last year Prime Minister Jacinda Ardern was the guest speaker at a private gathering in New York hosted by Bill and Melinda Gates.

She told the audience that under her administration New Zealand had taken a lead and embedded the United Nations Agenda 2030 into our legal and regulatory framework:

“…my Government is doing something not many other countries have tried. We have incorporated the principles of the 2030 Agenda into our domestic policy-making in a way that we hope will drive system-level actions… I believe that the change in approach that we have adopted in New Zealand is needed at a global scale…”

The event was arranged by Goalkeepers, an organisation set up by the Gates Foundation in 2017 to accelerate progress towards the 17 Sustainable Development Goals of the UN’s Agenda 2030.

In her glowing introduction of Jacinda Ardern, Melinda Gates told the audience that our Prime Minister “has released an international human rights plan in which New Zealand promises to take the lead on, among other things, gender equality and women and girls’ empowerment.”

She described our PM as “a true international leader who understands that the future of the world depends on eliminating inequality.”

It’s a shame Jacinda Ardern was not so upfront with New Zealanders when she decided to take the country down this experimental Agenda 2030 path. Most Kiwis would be completely unaware that not only have we adopted UN doctrine, but we are also apparently leading the world in gender equality and women and girls’ empowerment.

While the Ardern Government has not hidden the fact that it is committed to implementing the UN’s Sustainable Development Goals, they most certainly have not been open and transparent about the agenda that underpins those goals – nor the policy implications of “eliminating inequality”.

Agenda 2030 featured in the 2017 Confidence and Supply Agreement between the Labour Party and the Greens – although not by name. Instead, the parties made a commitment to the 17 Sustainable Development Goals that underpin Agenda 2030:

And that is the path the Labour-led Government has taken the country over the last three years.

While this has led to Jacinda Ardern becoming the poster child for Agenda 2030 – the UN’s blueprint for modern socialism – New Zealanders have remained largely unaware that we are being used as a guinea pig in an international socialist experiment.

In a speech to the International Conference on Sustainable Development in New York in 2018, the Prime Minister signalled her intention to lead the world by fully incorporating the Agenda 2030 Sustainable Development Goals (SDGs) into domestic affairs: “we have decided to try something no other country has done before and embed indicators like the SDGs into everything we do”.

She said her Government would no longer rely on traditional measures of progress such as ‘economic growth’, but would instead introduce new experimental indicators: “…we are establishing brand new measures of national achievement that go beyond growth… We have created a tool called the Living Standards Framework. It puts the notion of sustainable intergenerational wellbeing at the centre of the different decision making processes we have – policy advice, government expenditure and long term management of our assets.

“Our Statistics department is working on an ambitious project called Indicators Aotearoa New Zealand that aims to create a comprehensive set of indicators across the different dimensions of the current and future wellbeing of New Zealanders; economic, cultural, social and environmental.

“These new tools will help us deliver, and monitor the delivery of goals like the SDGs. Our first test of this new approach will be early next year. That’s when we will deliver our first budget using these new measures, and new approach. We’ve called it the well-being budget, and it will unashamedly look to invest in generational change…”

Just before the 2019 ‘wellbeing’ Budget was delivered, the Prime Minister explained to a Business New Zealand audience what the Government’s new approach entailed: “while economic growth is important – and something we will continue to pursue – it alone does not guarantee improvements to New Zealanders’ living standards… My hope is that this year, with the new Wellbeing Budget, you’ll see us setting a strong foundation for both our country and our people.”

The mainstream media doesn’t appear to have made much of Jacinda Ardern’s commitment to Agenda 2030, but that’s not surprising given their lack of balance.

This week’s NZCPR Guest Commentator Dr Oliver Hartwich, the Chief Executive of the New Zealand Initiative, describes how difficult it is becoming in this country to speak out openly – especially against the government:

“Our small population size has fostered a social conformity that makes it hard to speak one’s mind. With two-degrees-of-separation, you cannot afford to burn bridges.

“Most of us no longer dare question if it is grounded in reality and anyone who does is called unpatriotic and petty. So, at the risk of being torn to pieces, let me do it anyway.”

Dr Hartwich is especially critical of policy failures relating to housing. As he says, if there is one thing New Zealand is not short of it is space for building houses. Yet the high cost of sections in New Zealand, combined with overly bureaucratic planning laws and excessive building regulations, have led to a housing market that is “the most expensive in the developed world”.

The lack of affordable housing has become such a scandal over the years, that successive governments have prioritised fixing it. But to little avail, so entrenched is the ideological framework that created the problem in the first place.

The housing crisis has its roots in the forerunner of Agenda 2030, the United Nations’ Agenda 21, which for over 20 years, heavily influenced private property rights in New Zealand. ‘Smart growth’ policies designed to prevent ‘urban sprawl’ have been imposed by council planners up and down the country, resulting in a severe shortage of land for housing. The effect is plain to see – higher section prices that have contributed to the current housing affordability crisis.

Agenda 21, with origins dating back to the first Earth Summit in Sweden in 1972, was established by the United Nations in 1992. Based on the notion that humans are destroying the planet, it seeks to control our lives using the benign-sounding but far reaching policy mechanism of “sustainable development” – meeting the needs of the present generation without compromising those of future generations.

In 2015, when the UN updated Agenda 21 to Agenda 2030, they highlighted 17 sustainable development goals to control every aspect of our lives. From an end to poverty, to the intensification of cities, and the elimination of inequality, the UN has mapped it all out.

The following summary of the Agenda 2030 goals from the UN website doesn’t do justice to the complexity of the restrictions being proposed – full details can be found HERE:

The UN’s concept was big and bold – they wanted change that would require all sectors of society to mobilise for a decade of action: “to secure greater leadership, more resources… embedding the needed transitions in the policies, budgets, institutions and regulatory frameworks of governments, cities and local authorities… and people action, including by youth, civil society, the media, the private sector, unions, academia and other stakeholders, to generate an unstoppable movement pushing for the required transformations.”

Central to Agenda 2030, and justifying the need for ‘urgent’ action, is the “climate emergency”. It is being used to claim that humanity is destroying the planet, and to justify more regulation and control. That’s why every wildfire, drought, flood, or storm is touted as ‘evidence’ that a global warming Armageddon is just around the corner – and only avoidable if nations take action to implement the UN’s goals, including a significant redistribution of wealth from rich to poor nations.

In reality, this is the new face of socialism – first, Agenda 21. Now its Agenda 2030. Next it will be “Agenda 2050”. It will never stop because “equality” will never be equal enough for new age socialists like Jacinda Ardern.

It’s developed into an obsession over wealth equality, instead of the most important principle of all – equality of opportunity.

It’s an issue that is now dividing nations. But the difference between New Zealand and most other counties is that here, there is no open debate. We are being transformed into a socialist state, but without full disclosure by the politicians driving this radical change.

There has been no effective media inquiry about these developments, nor has there been any effective scrutiny from opposition politicians.

As a result, as Dr Hartwich notes, it has become increasingly difficult to freely debate these issues – especially now the media has become so openly biased to the left. In fact it’s a tragedy for our society that the Fourth Estate, that used to stand as a guardian of the truth, has now become part of the problem, with so many in the media crossing the line from critical analysis and reporting facts, into political advocacy.

In light of the present-day scarcity of balanced views, it is indeed ironic that while our access to information has never been easier than it is now, access to the truth has never been harder.

Let’s make no mistake that behind the smiles, sits the most radical socialist government in our history, with a Prime Minister intent on embedding the objectives of the world’s most socialist organisation into our policy and legislative framework.

To fight back, we have to start calling out socialism for what it is – but to call it out we first have to lift the veil and expose what is happening.

Next, we have to decide whether we want to become a socialist society that takes from those who achieve to give to those who don’t – or whether our ambition is for New Zealand to be an opportunity society, where everyone has the chance to better themselves and their families.

In other words, should New Zealand go down the path to socialism based on the United Nations’ Agenda 2030, or should we respect people’s individualism and freedom, and ensure they are given the opportunity to get ahead?

If it is the latter, then we collectively have a lot of standing up and speaking out to do before the next election!

*Do you support the UN’s Agenda 2030 being incorporated into New Zealand’s laws and policies?