Fiona Mackenzie’s background includes teaching, finance, project management and marketing communications. She has combined self-employment with voluntary work, and is a firm believer in the safeguards that true democracy provides.

“We are one,” Prime Minster Jacinda Ardern repeatedly told New Zealanders after the horrific Christchurch massacre. But are we really? We all share a love for this wonderful country with its democratic rights and freedoms. However, with the separatist ideology now prevalent in most political parties, the bureaucracy and public services, we are certainly not being governed as one people and democracy is being undermined.

Increasingly, local bodies and successive governments have been transferring responsibilities for control of resources that we all use and cherish to unelected, unaccountable representatives of tribal groups. There appear to be no objectives for them to be measured against and no prescribed way of removing them if they fail to deliver good outcomes for everyone.

The Hauraki Gulf is a prime example of where it’s happening. It is a treasure to all but has been managed under a statutory but rather dysfunctional co-governing body (the Hauraki Gulf Forum) since 2000.  The Forum is comprised of government departmental members (Conservation, Fisheries and Te Puni Kokiri), elected Council representatives and iwi appointees. They have declined requests to video proceedings, but witnesses have reported bullying and inflammatory comments promoting tribal control of the Gulf.

With the Forum trying to come up with a spatial plan since 2013, a “Stakeholder Working Group” took the project over. They say its members’ backgrounds included mana whenua, environmental, conservation, fishing, boating, aquaculture and land use. The Group has produced the “aspirational document” explained below. With no media coverage and only select consultation, most people are unaware of the possible consequences of this plan.

But it gets even more complicated. Our use and enjoyment of the seas, harbours and land catchments in the Auckland, Coromandel and Waikato regions (see map) are actually being threatened on three fronts: 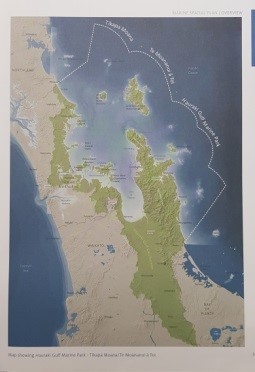 This Plan contains 181 recommendations for the Gulf. There has been pitiful consultation with the public, but plenty with iwi. The Plan states that “This mana whenua view is interwoven throughout all parts of the Plan including its science, management approaches and recommended actions.”

The sustainability of ecosystems and fish stocks are issues we all care about and stand to benefit from – or do we?  The recommendations support tribal elite having controlling rights in aquaculture, recreational and commercial fishing, harbour and catchment management plans. Governing committees could prohibit recreational and commercial fishing in “their” zone for any or all fish species based on “cultural values” (with no need for scientific evidence). So the Plan could result in effective tribal control of the entire Hauraki Gulf and associated lands.

Considering the importance of the region recreationally, economically and in lifestyle terms, you’d think the public and landowners would be considered stakeholders yet the Plan’s Overview states “it is envisaged that the various agencies will consult the public as the Plan is implemented”. Lucky us!

In December 2018, the Office for the Controller and Auditor General released a report on findings into the Sea Change planning process. It identified the lack of public consultation as one of several weaknesses: “Towards the end of the project, and when the plan had been finished, there was little discussion with the community about it. The plan could have benefited from wider communication and, from that, gained wider support from the community.”

Despite that, a Ministerial Advisory Committee has been established to progress implementation over the coming year. It will report to the Ministries of Conservation and Primary Industries (including Fisheries). Members were required to have collective experience in guiding Government in Tikanga Maori (the Maori way of doing things) and will include mana whenua and Te Ohu Kaimoana (Māori Fisheries Trust). There’s no mention of expertise in the all-encompassing Kiwi values.

And the Auckland City Council has established a Sea Change Political Reference Group “to ensure that Hauraki Gulf outcomes are further embedded in the work programme of the Auckland Council group”. It can be presumed that the instigators would like to have this entrenchment achieved before the Local Body elections in October.

Close to 600 overlapping claims have been lodged with either the High Court or the Crown. These cover the entire coastline and our territorial seas. They affect all beaches, harbours, the water/air columns above claims, all catchments, river mouths, infrastructure and adjacent lands.
The court and negotiation processes will take years. During this time, the claimants’ legal bills are being paid for by the taxpayer and every coastal RMA application must obtain the claimants’ approval.

The current Attorney-General, Hon David Parker, has given no reassurance that the Government will provide a public interest defence in any claim.

Regarding the 35 claims directly affecting Auckland, the Council’s James Stephens (Senior Advisor – Councillor Support, Democracy Services) has written that they are “neither opposing nor supporting the applications.” Meanwhile their strongly iwi-aligned legal Counsel and Sea Change’s ‘Independent’ (sic) Chair, Paul Beverley of Buddle Finlay, has been engaged to act on behalf of Auckland Council.

Private individuals or communities affected by any claims will have to pay their own costs, but then they may not even become aware of the possibilities until after the fact.

There are more and more ‘contemporary’ treaty claims being made. The Sea Change Terms of Reference specify that its implementation “shall not undermine the Crown’s commitment to hold Treaty negotiations over harbours with iwi.”  And that “These negotiations will lead to greater iwi involvement in the management of natural resources and the environments of the Hauraki Gulf and the Coromandel Peninsula.”

These new settlements have no connection to any past land confiscations, nor do they seem to bear any relation to the wording or understanding of the Treaty of Waitangi as of 1840.

Face the Future as One

The important question is whether a very selective identity-based model of ownership and control of public resources is the best way forward? Will it lead to a healthier environment, a fairer and more prosperous society, and peace in our time? Or will the hold on unaccountable, opaque power and revenue streams be evidenced by bullying, corruption and the loss of public rights?

The co-governing model (with the ongoing push towards co-sovereignty) desperately needs public discussion – hopefully before our freedom of speech is further constrained. Some complain that the co-governance bodies do not abide by the law and certainly don’t take the public interest into account before imposing new systems and rules. Some of those supposedly representing all the people simply roll-over and do whatever those representing tribal interests want.

There is no doubt that there are good and bad in any group. And without total transparency, many checks and balances, and the odd corrective action along the way, the flawed amongst us tend to flourish. Democracy has proven to be the most effective system for curtailing this propensity.

Recent events surely demonstrated that it is time to face the future as one people. It is the responsibility of our elected (therefore accountable and changeable) representatives to manage our public resources sensibly and openly for the benefit of all the people in New Zealand, not just a few.