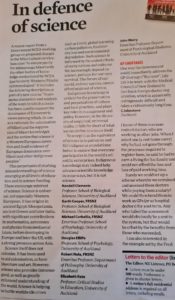 Last week a letter written by seven University of Auckland academics that appeared in the Listener, was greeted with extreme hostility from the left-wing establishment.

“A recent report from a Government NCEA working group on proposed changes to the Māori school curriculum aims ‘to ensure parity for mātauranga Māori with the other bodies of knowledge credentialed by NCEA (particularly Western/Pākehā epistemologies)’.

“It includes the following description as part of a new course: ‘It promotes discussion and analysis of the ways in which science has been used to support the dominance of Eurocentric views (among which, its use as a rationale for colonisation of Māori and the suppression of Māori knowledge); and the notion that science is a Western European invention and itself evidence of European dominance over Māori and other indigenous peoples’.”

It seems astonishing that the Ministry of Education is allowing academics who subscribe to the radical view that science has been used as a weapon of colonisation and a tool for the suppression of Maori knowledge to drive curriculum development.

As a result of their ideology they are demanding “parity” for Maori knowledge in the curriculum, claiming that as a result of the Ministry of Education’s Treaty of Waitangi obligations, “subjects grounded in te ao Māori and mātauranga Māori ought to have equal mana with subjects which reflect non-indigenous paradigms or knowledge bases.”

It is this sort of extremist thinking that underpins He Puapua, the Labour Government’s plan for Maori sovereignty by 2040. The separatist rationale behind that blueprint is now being assimilated into almost every Government service and policy area – including education.

While the professors acknowledge that ‘indigenous knowledge’ plays a critical role in the preservation of culture, they say “it falls far short of what we can define as science itself”.

They further state, “Indigenous knowledge may indeed help advance scientific knowledge in some ways, but it is not science.”

Their concerns overlay growing anxiety within the education sector that diverting curriculum time away from science to Maori spiritualism and culture, will create further disadvantage for students in a critical learning area that is already a significant challenge. The latest National Monitoring Study of Student Achievement of Science shows  only 20 percent of Year 8 students in New Zealand are achieving at or above expectations.

This week’s NZCPR Guest Commentator, journalist Graeme Adams, has analysed the storm of hysterical outrage generated by the Professors’ letter and explains that in spite of the histrionics none of the critics refuted the claim that Maori knowledge is not science:

“A distinctly curious feature of the backlash against the letter… is that none of its most prominent critics have actually defended mātauranga Māori (traditional Māori knowledge) as being scientific.

“In response to what she seems to see as heresy, the Vice-Chancellor of Auckland University, Dawn Freshwater, announced that the letter’s question of ‘whether mātauranga Māori can be called science has caused considerable hurt and dismay among our staff, students and alumni’.

“Freshwater added a further faint endorsement: ‘We believe that mātauranga Māori and Western empirical science are not at odds and do not need to compete. They are complementary and have much to learn from each other.’

“Again, this says nothing about whether mātauranga Māori is scientific. And the question that remains to be answered by Professor Freshwater and others is — if it can’t be defended as scientific, what is it doing in the science curriculum?”

In considering this matter, it’s important to recognise that the special role of universities in acting as the ‘critic and conscience of society’, by providing the public with independent, expert commentary on key issues, is enshrined in the Education Act 1989.

The Act also protects ‘academic freedom’, which it defines as “the freedom of academic staff to question and test received wisdom, to put forward new ideas and to state controversial or unpopular opinions”.

In a paper published in March 2000 for the Association of University Staff of New Zealand – Universities as Critic and Conscience of Society: The Role of Academic Freedom – Professor Gareth Jones explains the implications of academic freedom: “This would suggest that universities should be providing an environment within which academic staff can state and publish ideas and conclusions without fear of retribution or persecution, either within or beyond the walls of the universities. For this to happen, university authorities must be prepared to tolerate deviations from conventional wisdom by their academic staff, and to defend these staff when adverse pressures are brought to bear on them from sources outside the university.”

In responding to the hysteria generated by the letter from her seven professors, Vice-Chancellor Freshwater stated, “While the academics are free to express their views, I want to make it clear that they do not represent the views of the University of Auckland.” But by neglecting to properly defend her staff, she is clearly failing in her role.

Former MP and Police Inspector Ross Meurant not only questions the Vice Chancellor’s mandate to publicly “insult” her professors, but he also challenges the responses by Maori scholars:

“Various academics of Maori lineage collectively seem to hold the view, ‘Māori don’t need Western science to endorse or authenticate our knowledge systems’. The problem with this claim to fame is perhaps exposed by the following… ‘A new paper by the University of Otago… concludes that Māori were likely the first people to explore Antarctica’s surrounding waters, and possibly the continent. They write that Māori and Polynesian journeys to the deep south have been occurring for a long time, perhaps as far back as the seventh century, and are recorded in a variety of oral traditions. According to the oral histories of Māori tribal groups, the first human to travel to the Antarctic was the Polynesian explorer, Hui Te Rangiora’.”

Ross questions the accuracy of oral history and makes the point that the late Sir Peter Blake, a “highly skilled and experienced ocean-going mariner, talked about how hostile, treacherous and dangerous the Great Southern Ocean is to navigate on the way to Antarctica. How did the Maori manage that on their outriggers/canoes and what clothing and footwear did they wear to cope with the freezing conditions? No thermal underwear back then!! Did they have ice breakers?

“I say to those who claim Maori went to Antarctica as far back as 700 AD and even if these alleged excursions were as recent as 1700 AD it should be clearly demonstrated that the claims they make, were possible! Like, put up or shut up! Jump in a canoe with a paddle and a grass skirt; no thermal gear, no sextant and no harpoon or spear gun. And see what happens!”

Journalist and former newspaper editor Karl du Fresne reminds us that a sinister agenda is underway: “Attacks on free speech – even freedom of thought, since that’s what the enemies of free speech ultimately want to control – are coming so fast it’s hard to keep up… The latest involves seven University of Auckland professors who have effectively been blacklisted for writing a letter to The Listener politely but firmly challenging the notion that traditional Maori knowledge should be accorded the status of science… In the febrile ideological climate of 2021 the professors’ stance counts as heresy, and it brought the full, vindictive fury of the woke academic left down on their heads.”

Karl concludes, “The takeaway message from all this? It’s that even respected academics speak their minds at their peril. Depart from ideological orthodoxy and you can expect to be howled down, possibly even at the expense of your career. The aim is to deter dissent and discussion, and the tragedy is that it works.”

The caustic backlash against the professors – including from the head of their own university – surely demonstrates that free speech is no longer possible in this country. It’s in this political climate that Prime Minister Jacinda Ardern wants to criminalise free speech.

The six-week public consultation process to ascertain whether new hate speech laws are needed, closes at midnight on Friday. We would urge everyone who wants to see New Zealanders retain our right to speak freely without worrying that the Police will come knocking on our door if we say the wrong thing, to send in a quick submission – even if it’s just to say that you believe the current legal framework is adequate and more regulation is unnecessary.

Submissions can be emailed to: humanrights@justice.govt.nz or completed online HERE.

The point is that hateful speech is already highly regulated in this country – as we outlined in our overview HERE.

Those who want to introduce greater control over what fellow Kiwis can and can’t say have proposed a number of specific changes. They include transferring section 131 of the Human Rights Act into the Crimes Act to make it a criminal offence to use words which are ‘threatening, abusive, or insulting’ to intentionally ‘stir up’ ‘hatred’ towards a ‘protected’ group.

They have proposed increasing the penalties for the new crime from the current $7,000 fine to $50,000, and from a maximum of three months in prison to three years.

They want the wording of the section 61 civil offence in the Human Rights Act to be updated to match that of the new hate crime law – and a new civil offense ‘incitement to discriminate’ created to make it unlawful to incite others to discriminate against members of the protected groups.

Beyond that, what would be included in a Bill remains unclear, since the Minister of Justice – who is in charge of the reforms – refused to answer questions about the details, and the Prime Minister’s attempts to do so were muddled.

Former MP and constitutional lawyer Stephen Franks has published a comprehensive advisory on the law change proposals, outlining some of the complications that may cause confusion.

Wellington barrister Graeme Edgeler has also investigated the proposed law change and concludes, “I remain sceptical of the government’s hate speech proposals: I don’t believe the government has made the case for them, and I especially don’t believe it has explained nearly well enough the expression it wants its laws to cover, nor leave alone. I am very much open to the idea perhaps we shouldn’t change the law at all.”

Former broadcaster Lindsay Perigo is scathing about the law change proposals: “Rather than entrenching totalitarianism, let us boldly proclaim that there is indeed no such thing as a right not to be offended, and that the precept, ‘I disagree with what you say but defend to the death your right to say it’ should permeate all social discourse and be emblazoned across the sky.”

I will leave the last word to political commentator Chris Trotter, who strongly believes that introducing hate speech laws would be a disaster: “To bring the country together, the Royal Commission – and now, seemingly, the Labour Government – is intent on empowering the citizenry to send their neighbours to jail for up to three years for the ‘crime’ of pissing them off… It won’t work, Jacinda. No matter how much you’d like it to; no matter how sincere all those promises you made to the victims. It won’t work. You need to listen to those who are warning you that the unintended consequences of this direct attack on the freedom of thought and expression, guaranteed to all New Zealanders in the Bill of Rights Act, will be huge. Freedom is unruly. It’s rude. It hurts people’s feelings. Makes them angry. But people died for it, Jacinda. Leave it alone.”

*Do you believe the Government should abandon their planned hate speech law changes?