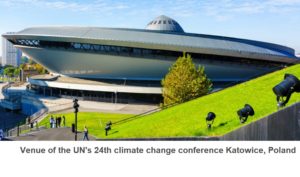 American mathematician and meteorologist Edward Lorenz was a pioneer of chaos theory. This is a branch of mathematics that focusses on the behaviour of dynamic systems that are highly sensitive to initial conditions and yield such widely diverging outcomes that long-term forecasting is impossible.

Professor Lorenz developed the theory while working on weather prediction, finding extreme differences in outcome, even when the model itself was accurate.

Chaos theory helps explain why weather forecasting is reliable one day out, but by 10 days is essentially just guesswork. That means that climate, which is based on long term weather predictions, is chaotic too.

Yet, unbelievably, the United Nations panel, which was set up in the late 1980s to monitor the impact of humans on the climate, continues to make authoritative declarations about the state of the global climate in 100 years’ time.

As could be expected of any well-resourced bureaucracy, their underlying imperative is longevity, and they quickly found that using alarmism increased their importance and power.

Dr David Kear, a former Director-General of the DSIR recalls the emergence of the UN climate body and its propagandising in a paper he wrote for the NZCPR in 2013 – see HERE.

He explained that early in his career, he joined an international group that wanted to assess the average rate of sea level rise as the Earth warmed from the “Little Ice Age” – the cool period from about 1500 to 1700 AD. With findings from around the world, they were able to determine the rate averaged 125 millimetres per century. Since it would take 8 centuries for sea levels to rise 1 metre, it was not considered a threat.

Over the years, Dr Kear attended many international science conferences representing New Zealand, including the first-ever “Conference on Global Warming” in Vienna in 1985.

He explains, “Unlike most such meetings, where a communiqué summarising achievements was released on the final day, the full results of this one were delayed for over 2 years. When they did appear on the front page of the NZ Herald two days before Christmas 1987, a world declaration included ‘Overseas scientists have estimated that the seas around New Zealand will rise by up to 1.4 metres in the next 40 years’. That article concentrated on the massive consequent problems, caused by our carbon dioxide emissions, but gave no adequate supporting science. That rate of rise was equivalent to 3,500 mm per century, 28 times faster than our 125 – hence we stupidly ignored it, thinking no-one could possibly believe it. But the World did believe, and the Global Warming mirage was born.”

Dr Kear explains that the predictions were challenged and eventually corrected: “They accepted that ‘1.4 metres in 40 years’ was wrong and re-evaluated it as ‘0.49 metres by 2100’. Thus they dropped 3,500 down to 500 mm per century – to 14% of the original. The cause remained unchanged – our CO2 emissions to the atmosphere. In no other human activity would those involved retain a belief when the most crucial item involved was found to be 86% wrong by themselves.”

Since then, nothing has changed – the UN still produces self-serving apocalyptical predictions of man-made global warming that bear little resemblance to reality but generate the desired political responses.

In fact, to show that mankind is to blame for the changing climate the UN’s operating brief was to focus on “a change of climate which is attributed directly or indirectly to human activity that alters the composition of the atmosphere, and which is in addition to natural climate variability.”

As a result, the only variable taken into account in UN climate predictions is the tiny amount of greenhouse gases produced by human activity. They ignore the sun, oceans, winds, clouds, humidity, pressure, rain, snow, or any of the other myriad of factors that we know influence the weather and hence the climate. 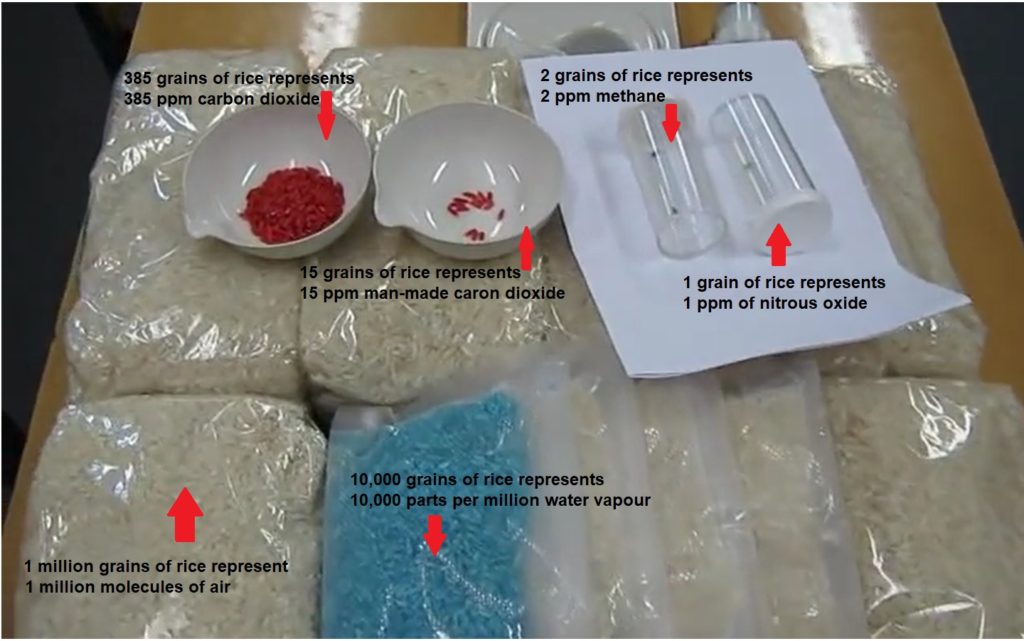 Essentially, the UN is asking everyone to believe that 18 ordinary molecules of air out of a million could cause catastrophic climatic collapse – and that halving 18 molecules down to 9, could significantly alter climate patterns.

To put New Zealand’s emissions into perspective using the grain of rice analogy, our 0.17 percent contribution to global man-made greenhouse gases is equivalent to a 0.03 portion of a single grain of rice and is too small to see.

Unbelievably, the UN’s extremist predictions are being accepted without question by politicians – and some media, as the following statement on a major New Zealand media website indicates:

“Stuff accepts the overwhelming scientific consensus that climate change is real and caused by human activity. We welcome robust debate about the appropriate response to climate change, but do not intend to provide a venue for denialism or hoax advocacy. That applies equally to the stories we will publish in Quick! Save the Planet and to our moderation standards for reader comments.”

It seems incredible that a member of the Fourth Estate could close the door to open debate. One can only hope that their decision will be urgently reviewed.

In fact such approaches are not dissimilar to the attitudes existing during the Inquisition, when Galileo, an Italian scientist, was censored and placed under house arrest for expressing views that were contrary to those of the establishment – namely, that the earth orbits the sun, instead of being at the centre of the universe.

Unpopular though his views were, Galileo was, of course, correct. Surely Stuff and other organisations that are presently suppressing the publication of the alternative view that human emissions are not destroying the planet, would not want their actions to be likened to those of the Inquisition.

This week’s NZCPR guest commentator is New Zealand engineer Emeritus Professor Michael Kelly of Cambridge University. A former Chief Science Advisor to the UK Government, Professor Kelly is a victim of such censorship by the Royal Society of New Zealand, as he explains:

“In April 2016, the Royal Society of New Zealand published a report ‘Transition to a low-carbon economy for New Zealand’ making 46 recommendations.  The report was deeply substandard in my opinion, and I am not alone.

“I contacted the chair of the working party to be told there was no real world data to review. This was nonsense, and I spent four months of a subsequent visit to New Zealand getting the data required to make a serious analysis of the recommendations.

“I wrote up my findings in late 2016 and the resulting paper was rejected by both the Journal of the Royal Society of New Zealand and the Journal of New Zealand Studies. Through my career I have understood that papers are rejected because they are wrong, trivial or derivative. Otherwise they are published to stimulate progress. This was not the case this time. Several referees agreed that the approach was a worthwhile one to undertake, and indeed that the original Royal Society Report was substandard, but they did not like the conclusions I came to. They did not dismantle my data or my line of reasoning; nor did they offer an alternative. They chose to cavil on details and on writing style, evidence of the bankruptcy of their position. Both editors curtailed debate. It is my contention that this shows a contempt for scientific integrity.

“I am publishing the original paper and the redacted referees’ reports here to show how serious debate is being suppressed. As a direct result of stifled debate, New Zealand is taking steps of great and certain futility and destruction of capital value.”

Professor Kelly is absolutely correct – what the Labour-led Government is planning will devastate our economy. What’s worse, most Kiwis are completely unaware of what’s coming – escalating fuel taxes and petrol prices, a significant reduction in livestock numbers and a subsequent fall in export returns, sky rocketing power costs, and rising foods prices.

According to former Reserve Bank economist Ian Harrison, the cost of reducing our infinitesimal greenhouse gas contribution is expected to be in the region of $200 billion.

The Government’s economic analysis shows that under their proposed plan, the agriculture sector could face reductions of up to 65 percent. This is in spite of article 2 of the Paris Accord specifically requiring nations to reduce emissions “in a manner that does not threaten food production”.

If Labour ignores that UN directive, farming in New Zealand will become a much smaller and fully regulated industry.  All so New Zealand’s infinitesimal greenhouse gas emissions can be reduced down to zero and the equivalent of a 0.03 portion of a grain of rice, eliminated.

Jacinda Ardern’s plan to cut back farming is no doubt seen as the easiest way to reduce New Zealand’s greenhouse gas inventory, since almost half of our emissions come from livestock.

Yet there’s mounting evidence that livestock should not be targeted by global warming activists. New research from a leading world expert on arable pasture science, Dr. Albrecht Glatzle, a Fellow of the Tropical Grassland Society of Australia, confirms, “There is no scientific evidence, whatsoever, that domestic livestock could represent a risk for the Earth’s climate”.

He’s also highly critical of those pressuring people to stop eating meat by accusing them of contributing to global warming: “Everybody is free to choose a vegetarian or vegan lifestyle, but there is no scientific basis, for claiming this decision could contribute to save the planet’s climate.”

Dr Glatzle believes that by exaggerating the negative effects of man-made emissions, the United Nations has systematically suppressed the beneficial effects that carbon dioxide has on nature, agriculture, and global food security.

Meanwhile, some 28,000 delegates from around the world have jetted into Katowice in Poland for the 24th United Nations Framework Convention on Climate Change. They are taking part in developing the so called ‘Paris rule book’, to enforce the ‘non-binding’ commitments they made under the UN’s 2015 Paris Accord on Climate Change.

This year’s conference of parties began with an address from the ‘people’s delegate’, Sir David Attenborough, who made a spectacular contribution to the scaremongering generated by these events when he said, “If we don’t take climate action, the collapse of our civilisations and the extinction of much of the natural world is on the horizon.”

The conference goal, of course, is to create alarm so the public are more accepting of the costly regulations and taxes that politicians are planning.

The United States had the wisdom to pull out of the Paris Accord not long after President Trump was elected.

Brazil’s new President-elect Jair Bolsonaro has promised to follow suit. He’s already withdrawn the country from hosting the next climate summit, and he’s appointed a foreign minister who believes climate change is a Marxist tactic designed to stifle economic growth.

It remains to be seen whether New Zealanders will decide the price of the Government’s climate extremism is too high and say enough is enough. The French President has just backed down from raising fuel taxes as a key part of his decarbonisation plan, following extreme protests that had the potential to destabilise the country.

Whether we will do what the French did and protest and demonstrate until the government backs down – or whether we will simply vote against Labor and the Greens at the next election for forcing a radical agenda onto the country that will destroy our economy and way of life – remains to be seen.

Only time will tell what the next steps in this saga will be.

Do you believe the UN’s models are a reliable predictor of the future climate?