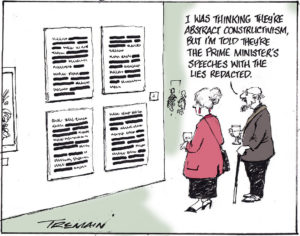 The strange world of Jacinda Ardern and the Labour Party is getting more bizarre by the day. Labour has the hallmarks of a poorly rating sitcom. The staged sincerity is no longer working for our PM, and Grant Robertson’s ‘hits’ on National leader Chris Luxon in his speech to the Labour Party’s Annual conference over the weekend had as much punch as a snowflake.

To make matters worse, the glow from the stage-managed conference vapourised a few hours later when the Newshub-Reid Research poll showed support for Labour and the Prime Minister plummeting.

Jacinda Ardern responded by saying, “I don’t govern by polls, I govern by people. I govern by what I see as the needs for our people”.

This comment simply reinforces the view that our selfie-centric Prime Minister lives in a world of make believe. She seems unable to comprehend that her popularity has plummeted because she is not governing according to ‘the needs of the people’.

‘The people’ don’t want Three Waters, yet Jacinda Ardern and her Maori caucus are persisting with their pretence that it is about something other than introducing tribal control of water.

‘The people’ don’t want to be ruled by the tribal elite, yet the scene is now being set to demolish local government as we know it and replace democratic control with tribal rule.

Without permission of ‘the people’, Prime Minister Ardern is undermining the democratic foundation of our society by elevating a racial minority into a governing elite with rights and privileges over every other New Zealander.

‘The people’ were never asked whether they wanted the unaccountable leaders of multi-million tribal business development corporations to have power over their lives. Instead, this represents yet another case where, in dictatorial fashion, Prime Minister Ardern is forcing her abhorrent He Puapua agenda onto New Zealanders.

An iwi leaders group meeting in Taupo last week gave a rare glimpse into the identity and nature of the ‘tribal elite’ – that ‘shadowy’ group who are being given control of key New Zealand resources and services by Jacinda Ardern’s Government.

Seventy members of the National Iwi Leaders Chairs Forum gathered to discuss a variety of matters including an alternative to Three Waters being promoted by the Mayors of Auckland, Christchurch, and Waimakariri, which excludes co-governance.

Their water services proposal was met with anger from former New Zealand First MP Tukoroirangi Morgan, who is now the chairman of Waikato-Tainui: “I don’t know which world they belong to, this is 2022 Aotearoa New Zealand, this is about partnership.”

And threats: “We will never be denied, we will never go silently in the night, our voice must be heard at the table and we must take our place, end of story.”

Those are not the words of someone committed to serving the public good, but the arrogant and intimidatory demands of someone who believes they have the ‘right to rule’. Any hopes that water services under the veto control of such representatives would serve anyone other than a tribal minority are naive and misguided.

These tribal rulers will call the shots and they will be accountable to no one. They will not be able to be challenged, nor sacked by ‘the people’ the PM claims she represents.

As a reminder of what iwi control looks like, consider the response of Tuku Morgan and the Chair of the Waikato River Authority, Tipa Mahuta (sister of Local Government Minister Nanaia Mahua and Chair of the new water regulator’s Maori Advisory Committee), to an urgent application by Auckland City to increase its water take from the river, following a prolonged drought in 2020.

In an initial response, the River Authority demanded a payment of up to 10 cents a litre, or $20 million a day! This was rejected by then Mayor Phil Goff.

Once Watercare had lodged their resource consent application, Tipa Mahuta opposed it, not because the biophysical effects of an increased water take would have created an adverse impact on the river, but because Watercare’s application wasn’t “respectful” enough.

Tuku Morgan also “vehemently” opposed it based on his “inextricable bond” with the river.

In the end, consent was granted, and even though consultation was not required under the Resource Management Act, it included a condition that Watercare develop stronger relationships with local iwi – and pay the Waikato River Authority $2 million a year for river restoration work.

In her submission Tipa Mahuta explained the personal nature of her motivations, “It is a privilege for me to carry on the work of my parents…”. Sir Robert and Lady Raiha Mahuta, with the help of Tuku Morgan, successfully negotiated a co-governance role for Tainui over control of the Waikato River.

Is expanding her parent’s legacy to cover all waterways in New Zealand what is really driving the obsession of Minister Mahuta to impose iwi control of Three Waters? Is that why Tuku Morgan, who is also committed to the Mahuta legacy, has now been appointed chairman of the Region 1 Three Waters iwi representation group – even though he’s based in Region 2? Is he the counter-force to take on Mayor Brown’s public opposition?

And why is our “for the people” Prime Minister tolerating New Zealanders being held hostage to a family legacy and the personal ambition of Minister Mahuta, when ‘the people’ are almost unanimously opposed to the scheme?

With control over water potentially wrapped up, local government is now the new focus for the Maori tribal elite.

That agenda was initiated in April 2021 when Minister Mahuta announced a comprehensive review of local government. The outcome was predetermined by the terms of reference that embodied her fake Treaty “partnership”.

With the outcome of the Local Government Review pre-determined, the reports produced by the Review Panel of Jim Palmer, Penny Hulse, Antoine Coffin, Gael Surgenor, and Brendan Boyle, are merely a façade  to mimic public consultation and an ‘inclusive’ process.

It’s clever politics, made easier by the mainstream media recipients of the $55 million Public Interest Broadcasting Fund being required to promote the fake partnership instead of challenging it.

The Review into the Future for Local Government was released last week, with a call for public submissions by 28 February 2023 – see HERE for details. It is the second of three reports by the Panel – an interim report was released in September 2021, and a third and final report will be delivered to the Government in June 2023.

Should Labour be re-elected in 2023, there is no doubt the reforms would be in place before the next local body election in 2025. That’s why it’s so important that political parties make their views on the proposed reforms explicitly clear.

A recent Q+A interview with a senior member of National’s Caucus, Erica Stanford, raises concerns about National’s commitment to undoing the damage being caused by Labour.

In response to a question by Jack Tame, “What role should iwi play in setting migration settings”, Erica replied, “A huge role. They’re our Treaty partner, right. And so they have a say in that. And I work really closely with the Maori members of my Caucus and also the Maori special interest group that sits within the National Party around this. And certainly, any policy we come up with needs to be consulted on with iwi as well.”

If it is official National Party policy that iwi are Treaty “partners” with the Crown – and if National intends consulting with iwi over every policy decision – then why should we have any confidence that they intend putting things right?

“Reforming local government in the way recommended in the report would be a giant leap forward for the government in achieving its He Puapua strategy.”

Frank explains that three fundamental themes emerge from the report’s 29 recommendations: embedding Maori as a governance ‘partner’, turning local government into an agent of central government, and re-structuring councils.

“There is considerable emphasis on councils adopting the ‘Maori world view’ and changing the Local Government Act to create ‘a genuine partnership’.”

He points out: “The Panel’s recommendations are based on their comments that ‘Councils remain predominantly made up of older European/Pakeha elected members. There needs to be more diverse representation and increased governance capability at the council table. While Maori wards and constituencies are a positive feature, they were not designed to provide for Tiriti-based representation of mana whenua or significant Kaupapa-based groups. Councils need to increase their capability in, and understanding of, Te Tiriti o Waitangi and te ao Maori.’

“Clearly, it is the Panel’s view that ‘older European/Pakeha elected members’ need to be replaced with Maori members.”

Frank also explains that reinventing the role of local government to become an “agency” of central government would require councillors and council employees to be “subject to the same terms and conditions as state employees”.

This is no doubt aimed at gagging them, to ensure they can’t criticise the government.

And when it comes to the final structure of local government, Frank explains the Panel provides a range of options including amalgamation, and a greater reliance on community boards: “In all cases, there would be a ‘statutory requirement on councils to foster Maori capacity to participate in local government’ and develop a ‘partnership framework that complements existing co-governance arrangements’.

“In other words, Maori would have a greater presence around the decision-making table. In the Panel’s view, having Maori wards is not enough to achieve a ‘partnership’.”

Other recommendations in the report include replacing First Past the Post with Single Transferrable Voting, lowering the voting age to 16, and introducing a four-year term.

The main proposals are so radical, you might ask why is Labour planning to ‘deconstruct’ local government in this way?

The reason is simple – it’s all part of their He Puapua rollout. They want to deliver the governance of local authorities to the tribal elite so there will be one set of rules based on race for them, and another set of rules for everyone else.

Most people would call this ‘Apartheid’.

They are going about it by divesting the key functions that underpin the purpose of local authorities, including the provision of water services and resource management functions, and then they are re-shaping what’s left into an agent of central government run by iwi.

If their plan succeeds, a self-interested tribal elite will gain full control of local government. They will be in charge of rates, spending, and regulations. They will have the ultimate right of veto. No changes in local government will be able to take place, without their approval.

So, what happens next?

Local Government New Zealand is urging councils to put in submissions in support of the reforms, saying: “We encourage all councils to make a submission on the draft report by the 28 February deadline. The Government has made it clear the review’s final recommendations will only see action if there’s a real push from local government.”

We suggest it’s time ‘the people’ – those that Jacinda Ardern claims to represent – take action to say this is not what they want.

The first thing to do is to contact local councillors and encourage them to hold a referendum on the proposals so their community can have a proper say. During the local body elections, most new councillors would have pledged to support local democracy and more community involvement – it’s time their promises were put to the test.

The NZCPR Local Government directory of councillor email addresses can be found HERE.

We also encourage everyone to make an individual submission to the panel. Since silence is taken as acceptance, the time to stay silent has long passed. It is only because “the people” are finding their voice that Jacinda Ardern’s stardust is returning to dust and will be blown away come election 2023.

*Do you believe co-governance has a place in local government?