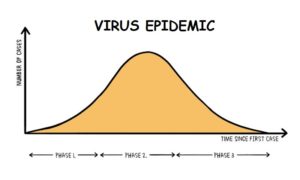 “New Zealand is self-isolating and the policy measures announced last week are some of the world’s tightest border controls yet. In effect it places a wall around New Zealand that closes off international travel and shuts down our international tourism industry. These measures are intended to slow or halt the spread of the virus, but the economic consequences are significant.

“The issue most are now pondering is how long the financial contagion will last. That depends on how long the virus remains socially active, how long the government restrictions remain in place, and how effective government measures are in mitigating the economic effects of their controls.”

As Frank notes, the economy will recover, but there are tough times ahead. In the meantime, since keeping ourselves safe is a priority, let’s update what we now know about the virus.

When we last reported on the new coronavirus on 1 March – eleven weeks after the first case had emerged on December 12 in the city of Wuhan in northern China – some 87,137 people had been infected in 58 countries, with 2,977 recorded deaths. Now, two weeks later, World Health Organisation data shows the infection, is spreading rapidly with 153,517 confirmed cases in 143 countries, and 5,735 deaths.

The virus epidemic follows a bell curve. Phase one is where cases arise sporadically as people who have contracted the virus travel around and infect others. Phase two is community transmission, where the growth in the number of infected people outpaces the ability of the health system to contain the spread. And phase three is where the outbreak is finally brought under control.

Data on the Worldometer website shows the progress of the pandemic. The shape of the graphs provided for a selection of countries tells the story – their epidemic is only under control when their graph resembles a bell curve. Only China and South Korea can be seen to be getting on top of the problem. For Italy, Iran, Spain, France, the USA and the UK, there is a long way to go – click HERE to see the detail.

With most highly contagious diseases, the strategy used by governments to build community immunity (also known as ‘herd immunity’) is public vaccination programmes. Unfortunately, a vaccine for COVID-19 is still some months away. And while there have been some promising reports of success in treating very sick patients with cocktails of anti-viral medications, the successful containment of the disease relies on good management by health authorities, and sensible measures being undertaken by the public.

So, what have we learned about COVID-19 in the last couple of weeks?

For one thing, it seems to like colder temperatures more than warmer climates. New studies indicate that like the  two deadly coronaviruses SARS and MERS, as well as the viruses that cause influenza, COVID-19 seems less potent in warmer climates. While this could be helping New Zealand avoid the worst right now, it could signal a difficult winter lies ahead.

Since COVID-19 grows rapidly in the upper respiratory tract – nose, mouth, and throat – and sheds extremely efficiently through breathing, it now appears that viral shedding is the greatest during the first five days of infection, before most patients even realise they have caught the disease.

This has huge implications for the management of the infection. While those who are symptomatic and pass on the virus through the droplets they cough and sneeze are recognisable, those with no clinical symptoms can only be identified through tracking and testing the contacts of those who develop the symptoms.

That’s also why governments in many countries – including China, South Korea, Singapore and Japan – are distributing surgical face masks to residents to wear in public to help prevent the spread of the virus.

Professor David Hui, a respiratory expert at the University of Hong Kong explains it’s “common sense” that wearing a mask will protect against COVID-19. “The mask provides a barrier from respiratory droplets, which is predominantly how the virus spreads. Patients with COVID-19 often have mild or even no symptoms, and some researchers believe it can also be transmitted when patients are asymptomatic—meaning patients can be contagious and don’t know they’re sick.”

When it comes to children, while they are extremely vulnerable to the coronaviruses that cause colds and flu, they don’t seem susceptible to the more dangerous SARS, MERS, and COVID-19. Some studies indicate differences in the way the immune systems of the young and old respond to this virus may be the reason.

While most people who contact COVID-19 recover, in adults over the age of 60 and in those with underlying health conditions – especially diabetes, cancer, lung and heart disease, and hypertension – it can become life-threatening.

As well as infecting the lungs directly, the virus can trigger an excessive immune system response. Called a cytokine storm, the overproduction of immune cells floods the lungs, causing acute pneumonia and multi-organ failure. If doctors treating severe COVID-19 cases are able to diagnose and treat cytokine storm syndrome with commonly available remedies, the death rate from the virus can be reduced dramatically.

While a child’s immature immune system produces relatively low levels of cytokine, preventing the development of this dangerous syndrome, they are still able to spread the disease. That’s why an increasing number of countries are now closing schools and universities as they try to contain the virus.

One of the key recommendations to keep yourself safe involves ‘social distancing’ – maintaining sufficient distance between yourself and other people to stay out of the range of infection through coughing, sneezing or breathing. The recommended distance is now 2 to 3 metres.

That’s, of course, why large gathering are now being banned.

But as well as breathing in the virus, it can also be picked up through contact with infected surfaces. Research now shows that the exhaled COVID-19 virus, can remain viable for over a week, depending on the surface. For steel it’s up to 48 hours, glass and wood for four to five days, and for plastic, up to nine days.

Fortunately the virus can be destroyed by proper cleaning, as microbiologist Dr Siouxsie Wiles, explains: “The things we’ll be looking at keeping clean are things that other people can cough and sneeze on, or that lots of people touch. In a shared workspace this will be things like door and fridge handles, handrails, lift buttons, and switches… If you are using a disinfectant make sure it says it is antiviral and follow the instructions. Often, we just end up using a cloth to wipe the microbes around rather than actually letting them sit and stew in the disinfectant first so that it can do its job. Surfaces will need about 10 seconds soaking with the disinfectant for it to work.”

The reason that cleaning agents are effective against the virus is due to their chemical makeup. COVID-19 is an “enveloped” virus, which means it has a protective lipid membrane – like a fat layer. Detergents and soaps, which are effective at breaking down fats, dissolve the protective layer of the virus and kill it.

In his article ‘How Soap Absolutely Annihilates the Coronavirus’, science reporter Brian Resnick explains the chemistry and enthusiastically writes, “When you wash your hands with soap and water, you’re actually annihilating the viruses, rendering them harmless. This makes me excited to wash my hand more. As I’m washing with soap and water and counting to 20, I’m going to imagine a battle being waged on the nano-scale in the teeny-tiny folds of my skin. The soap is charging in, sticking to viruses, and tearing them apart in brutal, heroic fashion. It’s almost like the Avengers, but better. Because it’s real. And it can help stop the spread of this outbreak.”

Thorough hand washing – see HERE for how it should be done – helped defeat the deadly Ebola disease in Africa. It involves giving soap 20 seconds to destroy the virus – enough time to sing ‘Happy Birthday’ twice!

With countries around the world now struggling to contain COVID-19, insights can be gleaned from the success of China.

Since they have experienced deadly virus outbreaks in the past – namely the H5N1 bird flu, which killed 50 percent of those infected, and SARS, which killed one in ten – the country was better prepared than most for a viral outbreak.

Essentially their goal was to interrupt the transmission chains in humans, through early identification, early isolation, early diagnosis and early treatment.

The identification of suspect cases using temperature screening and questioning was crucial to containment efforts. This involved setting up thousands of health and quarantine stations in train and bus terminals, airports, and at the entrances to many institutions, community facilities, and hospitals.

All suspect cases were tested, with results returned the same day. Patients found to be positive were transported to designated hospitals, where they were cared for by specially trained staff wearing full protective clothing.

All close contacts were rigorously tracked, tested, and quarantined.

Temporary hospitals were set up using facilities like gymnasiums and exhibition centres to dramatically increase bed capacity for mild patients.

Severe and critical patients were treated in special medical centres, with expert groups available for consultation, in order to minimise mortality.

Patients were not allowed visitors, and were only discharged after two tests taken 24 hours apart come back negative. Once they returned home they were initially asked to minimise family and social contact, and to wear a mask as it is thought that newly recovered patients may still carry the virus.

Firstly, in spite of public officials saying that face masks don’t help to protect people from the virus, they clearly do since that’s what medical staff use. The problem appears to be one of ‘supply’. Perhaps, just as the UK Prime Minister Boris Johnson is urging British companies to join a “national effort” to produce more ventilators and other medical equipment “at speed” to help the deal with the virus outbreak, New Zealand companies could be urged to help produce face masks for Kiwis.

Secondly, while our Prime Minister has announced a range of containment measures, an important question for the Government is whether our already over-stretched health services will be able to cope with a COVID-19 outbreak?

The reality is that since the government removed targets for specialist appointments and elective procedures, hospital waiting lists have blown out. With tens of thousands of people waiting for treatment, and hospital emergency departments already full to overflowing, it appears that an influx of highly contagious and very sick COVID-19 patients is a disaster waiting to happen.

In the UK, the government is expanding health system capacity by securing private hospital beds as a reserve. Perhaps that’s something our government could do.

The UK will also start distributing 10-minute self-testing kits around the country next week. Given the difficulty New Zealanders who fear they’ve been infected with the virus are having getting tested, maybe this is something else our government could do.

Furthermore, with winter’s influenza vaccine usually available in April, the government should make it freely available to all New Zealanders, to help keep our population as healthy as possible to deal with COVID-19.

Finally, since keeping ourselves safe is largely our own responsibility, singing happy birthday twice while we vigorously wash our hands, may not be quite as crazy as it sounds!

*Do you believe New Zealand’s health service could cope with a widespread outbreak of COVID-19?