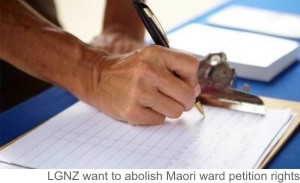 President Thomas Jefferson once said, “The best defence of democracy is an informed electorate.”  He was right, of course, but perhaps he should have added, “… that is prepared to act”, because these days, action is everything.

Action is indeed needed right now to defend a community’s democratic right to call a referendum if their local council decides to establish a Maori ward, since Local Government New Zealand is attempting to have this important public power abolished.

LGNZ, the lobby group for the country’s 78 local authorities, is calling for a law change to give councils the exclusive right to decide whether or not to create Maori wards. But questions are now being asked as to who is behind this campaign – more on that later.

It is indeed ironic that LGNZ, the ‘voice’ of local authorities that claims to be standing up for “Local democracy powering community and national success”, is now attempting to undermine ‘local democracy’ by abolishing a community’s right of veto over Maori wards. As the law currently stands, a council decision to establish Maori wards can be challenged if more than 5 percent of the electorate petition their council to hold a binding referendum.

LGNZ wants councils to be able to make decisions about Maori wards without the risk of being challenged by voters. So while they claim to support local democracy – it’s clearly only when they have the final say!

In an open letter to the coalition Government, the President of LGNZ, Dunedin Mayor Dave Cull, called for the removal of the Maori ward petition rights from the Local Electoral Act.

These petition rights were introduced by Helen Clark’s Labour Government in 2001, in recognition of the fact that the establishment of Maori wards represents a major constitutional change which should only proceed with the express approval of voters. The provisions were modelled on those for the other constitutional change in the Act, namely, changing the voting system for local elections.

To justify this glaring inconsistency, LGNZ is claiming that introducing Maori wards is no different to creating other wards, and so the poll provisions need not apply.

But this is a gross misrepresentation of the facts. Boundary changes to create new wards do not change the basis on which councillors are elected, nor do they divide communities by race and force electors to vote on the basis of their ancestry.

Since it appears that LGNZ did not consult with councils before launching their radical campaign to undermine local government democracy, who is the driving force?

This week’s NZCPR Guest Commentator, political analyst and freelance journalist Michael Coote, has been investigating and believes that iwi leaders are calling the shots:

“The Iwi Chairs Forum (ICF) is a leading advocate of ‘Maori First’ racial chauvinism, imposition of associated rights and privileges for Maori not shared by other New Zealanders, and a strong and determined supporter of Maori co-governance in local authorities.  In early August, 2015, the ICF and LGNZ signed a Memorandum of Understanding between themselves in which they committed to work closely together…

“The apparent wellspring of LGNZ’s latest burst of activity over changing the Local Electoral Act in a way that will most benefit not ordinary electors or members of local communities, nor even necessarily LGNZ’s members, but LGNZ’s partner since August 2015, the ICF, and the Maori tribes and corporations the latter represents and whose interests it tirelessly promotes.

“There is an appearance of conflict of interest in LGNZ’s public position as espoused in its open letter, which seems calculated to serve the wishes of the ICF, a race-based organisation that uniquely enjoys a Memorandum of Understanding-mandated ‘one-to-one relationship’ with the National Council of LGNZ.  The ICF could well have written LGNZ’s letter and may even have contributed to it.”

Back in 2015 the NZCPR outlined the danger of this Memorandum between LGNZ and iwi leaders, expressing concern over Clause 16(b), which states that the parties will reach a consensus on matters of strategic significance including “local democratic representation and decision-making”. With clause 17 stating, “The parties will work together to agree on specific projects that they will advance together”, it certainly appears that crushing the local government democratic rights of communities, by abolishing Maori ward petition rights, is their latest joint project.

Over recent months, communities in five local authority areas – the Western Bay of Plenty, Kaikoura, Manawatu, Whakatane, and Palmerston North – have called on their petition rights, to challenge the dictatorial decisions of their local councils to racially divide their communities through Maori wards.

In fact, over the years, dozens of ratepayer groups have used the provisions to bring their local councils back into line with the desire of their communities for unity.

Attempts to abolish public petition rights have also been tried in Parliament. In 2010, the Maori Party co-leader Te Ururoa Flavell used a Private Members Bill to try to abolish petition rights and force all councils to introduce Maori wards. The Local Electoral (Maori Representation) Amendment Bill was defeated by 57 votes to 64, with Labour, the Greens and the Maori Party in support, and National, ACT, and United Future opposed.

In 2017, Green MP Marama Davidson also used a Private Members Bill to attempt to remove petition rights by aligning the process by which councils establish Maori wards to that of general wards. The Local Electoral (Equitable Process for Establishing Maori Wards and Maori Constituencies) Amendment Bill would have put into law the demands made in a petition to Parliament by the former New Plymouth Mayor Andrew Judd, who is now on an iwi-backed crusade to introduce compulsory Maori wards in all councils. His end goal is co-governance – 50:50 Maori to non-Maori representation. The Bill was voted down by 48 votes to 71, with the Greens, Labour, the Maori Party and United Future in favour, and National, New Zealand First and ACT opposed.

The Minister of Local Government and Maori Development, Nanaia Mahuta, has already confirmed that she would like Maori ward petition rights abolished – as has the  Minister for Crown-Maori Relations, Kelvin Davis.

These Ministers have recently gained a new ally in the form of Marama Davidson, the newly elected Green Party co-leader, who claims that abolishing Maori ward petition rights is now her party’s primary objective.

What all of this means is that only two things stand in the way of a potential law change – New Zealand First and public opinion.

If New Zealand First stands firm on their pre-election promise to oppose race-based laws, there would be insufficient Parliamentary support for this anti-democratic law change to go through.

However, if New Zealand First rolls over – as they have already done on a number of occasions on issues where supporters would have expected them to take a stand – the only thing left is public opinion.

If the public at large were aware of the racial agenda that has now been set in motion, it would be much more difficult for the troika government to change the law. Unless those who do understand what’s going on help to raise awareness of this attack on our democratic rights, the iwi leaders, who are behind this campaign, will succeed in getting public petition rights removed. They want Maori Wards established throughout the country, with 50:50 co-governance their ultimate goal.

So what needs to be done to defend local government democratic petition rights?

Every member of the ruling LGNZ National Council needs to be contacted and individually asked whether they support this Maori sovereignty campaign by iwi leaders to undermine local government democracy – and if they don’t support it, what they intend doing about it.

The Mayor and councillors of each local authority – see HERE – should be asked the same questions, as should each Member of Parliament – see HERE.

Since the new Green co-leader claims her Party wants to remove local government Maori ward petition rights, all Green MPs should be asked whether the process they will be recommending for changing the Local Electoral Act will mirror their policy for changing the Electoral Act: “The Green Party will consider supporting changing to a new electoral system only if the new electoral system is approved by a free and fair referendum of all people… eligible to vote.”

Will Green MPs uphold their principles and require that any change to the Local Electoral Act should be “approved by a free and fair referendum” of all eligible voters?

Opposition MPs need to be asked what action they intend to take to uphold the democratic rights of New Zealanders and defend Maori ward petition rights.

In 2006, National MP Tony Ryall’s Private Member’s Bill would have removed all racially-based local government representation. In his speech to Parliament on the Local Electoral (Repeal of Race-Based Representation) Amendment Bill, he stated, “The National Party view is that race-based representation is no longer needed in New Zealand, either at a parliamentary level or a local government level. We believe that it is divisive.” The Bill was defeated by 56 votes to 62, with only National, New Zealand First, and an Independent MP supporting it.

Crucially, each member of New Zealand First also needs to be asked whether they will take a stand and defend the public’s right to local government democracy, by opposing any Bill that seeks to abolish Maori ward petition rights.

Since abolishing public powers is a highly controversial constitutional issue, one cannot rule out the Government attempting to change the law by stealth.

After all this is how a former Labour Government dealt with the extremely controversial issue of banning corporal punishment in schools. Without any consultation at all with schools, teachers, or parents, Labour inserted the ban into the 1990 Education Amendment Bill as it was going through its final debates in Parliament. As Hansard records: “Part 1 has had slipped into it at the last moment a clause to abolish corporal punishment in all schools, including private schools. The schools have had no chance to make submissions on the matter. The Government has sneaked it into the Bill at the last moment.”

That means MPs defending Maori ward petition rights need to carefully scrutinise not only every amendment and Supplementary Order Paper lodged by the Government on Bills that are going through Parliament, but especially Statute Amendment Bills, since these Omnibus Bills contain many amendments to many laws, and while they are meant to be non-controversial, it is not unknown for governments to try to slip through contentious changes, if they think their opponents are asleep on the job.

At the present time, two local government Bills are in front of Parliament that could be used to push through the abolition of petition rights. The Local Electoral Matters Bill, to introduce an online voting trial, is still going through its first reading.

The Local Government (Community Wellbeing) Amendment Bill, which replaces the need for councils to prioritise providing core services in a cost-effective manner with the requirement to promote the social, economic, environmental and cultural well-being of their communities, is now in front of the Governance and Administration Select Committee. Submissions have been called and are due by midnight on Friday 25 May 2018 – full details can be seen HERE.

Right now the threat to the public’s democratic rights from iwi leaders is very real and dangerous – especially as they have LGNZ and many Members of Parliament in their pocket. That means urgent action is needed across the board, if these important petition rights are to be successfully defended.

Should a binding referendum of all voters be required for any attempt to abolish Maori ward petition rights?