Democracy in New Zealand: A Stocktake 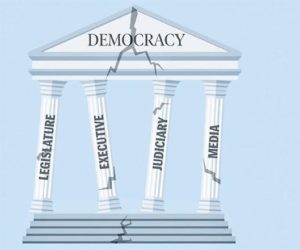 More and more Kiwis are beginning to realise that the campaign to change our country’s name from New Zealand to Aotearoa is part of a wider agenda to replace democracy with tribal rule. The transfer of democratic rights and public resources to the elite of Maoridom – who run billion-dollar business corporations that pay no tax – is being orchestrated by Prime Minister Jacinda Ardern through her commitment to the Treaty partnership fiction and equal tribal co-governance.

Given this threat, let’s do a quick stocktake of New Zealand’s democratic safeguards.

The building blocks of a representative democracy are the four ‘pillars’ of the Legislature, the Executive, the Judiciary, and the Media. It is the strength of each of those foundations that preserves our freedom and democratic rights.

The first pillar of our democracy, the ‘Legislature’, is our House of Representatives, and its primary responsibility is law-making. Our 120 Members of Parliament are elected under the Mixed Member Proportional voting system that was first recommended by the 1986 Royal Commission into the Electoral System. They warned, that if the Maori seats were not abolished when MMP was introduced, an over-representation of Maori in Parliament would result.

The Maori seats had been introduced as a temporary measure in 1867 to ensure Maori men, who didn’t qualify under the property ownership requirements of the day, could vote. Those seats should have been removed when male suffrage was adopted in 1879 – or when universal suffrage was introduced in 1893.

When the legislation was first tabled in Parliament in the early nineties, to begin the country’s journey to MMP, there were no provisions for Maori seats. But as a result of pressure from Maori leaders, the seats were retained.

As predicted by the Royal Commission,  Maori, who make up 12.3 percent of voters are now disproportionately over-represented in Parliament with 20 percent of the country’s MPs.

If the seven Maori seats were removed, Maori would still be over-represented with 14 percent of MPs.

It is now time to abolish the Maori seats to strengthen democracy and ensure Parliament is more representative of New Zealanders.

The second ‘pillar’ of democracy, the ‘Executive’, consists of the Prime Minister’s Cabinet and Government Ministries – the executive arm of the Government that runs the country. The policy agenda they implement is presented to the public in a party manifesto in the lead up to an election, and the public mandate they receive from voters gives the winning parties the constitutional legitimacy to govern.

That’s how it should work, but instead of sticking to their election manifesto, the 2020 Labour Government is rolling out He Puapua. Developed in 2019 as a roadmap for implementing the United Nations Declaration of the Rights of Indigenous Peoples, it is a blueprint for tribal rule. Jacinda Ardern not only kept He Puapua hidden from her then coalition partner New Zealand First, she also deliberately concealed it from voters during the 2020 election campaign.

So, while the ‘Executive’ is pressing ahead with a secret separatist agenda that undermines democracy, they are failing to deliver on their manifesto policies, including improvements to their management of Covid-19.

Labour promised to strengthen border security, improve contact testing and tracing, and roll out a strong national immunisation programme. Yet here we are with the worst vaccine rollout in the OECD and another border failure forcing another nation-wide lockdown, with the same devastating consequences as last time – since rules and procedures have not been refined.

The Government can’t even provide the basics for a country under threat from a world-wide pandemic, with the NZ Herald reporting the number of Intensive Care Unit beds has fallen from 358 in March last year to 284, giving New Zealand – on a per capita basis – less than one-third of the average number of critical care beds amongst 22 OECD countries, and putting us in 21st place, followed only by Mexico.

We are also being denied some of the innovations used overseas: why are Covid home testing kits, like those being sent out to families across the UK, banned in New Zealand, when they could be helping with early detection?

The Executive undermines personal freedom and erodes democracy through the dictatorial manner in which it implements controversial policies.

The shock ban on new deep sea exploration licenses, that is closing down the Taranaki oil and gas industry and is now contributing to New Zealand’s rising cost of living, was undertaken without any democratic involvement.

A similar lack of democratic process dominated the abolition of firearm ownership rights, following the Christchurch mosque attacks, and more recently, the outrageous decision to retrospectively remove the democratic rights of communities to call for a referendum over Maori wards. Some are now warning that this is to clear the way for tribal control of local government.

Now, the Government is even trying to force councils to ignore their legal responsibility to democratically consult with their communities over the Three Waters proposal, that will take billions of dollars’ worth of assets owned by ratepayers and give control to Maori. To email councils to ‘Say “No” to Three Waters”, please visit our campaign page at nzcpr.com/3waters.

The third pillar of a democratic government, the ‘Judiciary’, is responsible for the interpretation and application of the laws passed by Parliament. As such, the independence of the judiciary is a cornerstone of our democratic society and a safeguard of the “rule of law”.

This week’s NZCPR Guest Commentator, Anthony Willy, a former Judge and Law Lecturer, explains the crucial importance of the independence of the judiciary:

“Judges are ordinary people who know something about the law and court processes but appointed to do an extraordinary job. Ordinary because on appointment they bring with them their personal range of the human prejudices and foibles to which the flesh is heir. Extraordinary because they are the only individuals in society who can determine our civil and criminal rights and obligations, and who stand between our liberties and oppression be it from government or in whatever form it may arise.

“They are the guardians of the common law which ensures that all persons appearing before the courts are treated equally and with respect and to whom the law will be applied impartially irrespective of race, colour, creed, or one of the more fashionable causes currently enjoying a place in the sun.

“All of that is guaranteed by the Judicial oath which should be displayed in every Judicial chamber and Court. It requires the newly appointed judge to discharge the office ‘without fear or favour affection or ill will.’ That being so, it is well established that any criticism of a judge’s decisions should be moderate, factual, and tempered with respect, not only because the critic is rarely in possession of all of the facts, but because intemperate criticism diminishes not only the Judge, but more importantly the standing of the office. The consequences of a loss of public confidence in the office of Judge are incalculable.”

This latter point is especially relevant given recent developments where Sir Wira Gardiner, the acting head of a Government Department, called on the Chief District Court Judge and the Principal Family Court Judge to intervene in the running of a Family Court case. So concerned was the  presiding Judge, that he warned his superiors that interfering in an on-going case was “a breach of appropriate judicial independence and judicial conduct”.

Commenting on the affair, journalist and former newspaper editor Karl du Fresne explains, “Oranga Tamariki and a Hawke’s Bay iwi tried to have a young Maori girl removed from a safe, loving and secure Pakeha foster home because her cultural needs were supposedly not being met. That in turn has led to an even more disturbing development… I can’t recall a New Zealand judge ever rebuking two of his judicial superiors and effectively telling them to pull their heads in. But that’s what Family Court judge Peter Callinicos did when two senior judges appeared to interfere in a case he was hearing that related to the girl.”

Karl concludes, “This is a case where a vulnerable child’s best interests, if they have been considered at all by those with power over her future, have been treated as a far lesser priority than the heartless demands of race politics and the culture wars… The involvement of a heavyweight Wellington influencer like Gardiner (who, coincidentally or otherwise, stood down citing health reasons) does nothing to diminish the impression that the judges’ intervention in a case with political overtones was irregular.”

“When I became a judge they were just starting to talk about turning the control of child welfare agencies over to Indigenous groups. This changeover took place during the 1980s, and 90s… Children were regarded as the property of Indigenous tribes, and this led to tragedies. Children who had been in stable homes with loving parents since birth were taken from their homes and placed in Indigenous homes, simply because the foster parents were not Indigenous… Among other things, I strongly denounced the system of categorizing children by race and stated that best interests should be the only test for all children.”

Another serious concern relating to the justice pillar of our democracy – and a key objective of He Puapua – is the on-going attempt to introduce Maori tikanga (customs) into the common law.

The danger has been highlighted in the Marine and Coastal Area Act claims process where a Judge in the first High Court case ruled that tikanga trumps common law requirements. If this decision stands, the entire New Zealand coastline is likely to fall into tribal hands. That is definitely not what Parliament intended, and that’s why we are supporting an appeal to the Court of Appeal.

The fourth pillar of democracy is the ‘Media’. Often referred to as the Fourth Estate, their role is to act as a watchdog, informing the public and holding the government to account.

The problem New Zealand faces is that the Ardern Government is now funding the media through a $55 million Public Interest Journalism Fund.  One of the eligibility requirements is promoting the fiction that Maori are in “partnership” with the Crown – a fundamental premise of He Puapua.

Raewyn Rasch (who identifies as Ngai Tahu) is the head of journalism for NZ on Air, the agency which administers the Fund. She has reported that of the 34 applications approved in the first funding round, 40 percent of the money will go to Maori journalism projects.

Karl du Fresne is extremely critical of the Fund: “I predict most of our money will end up being spent on advocacy journalism. As with the $3.5 million Three Waters propaganda campaign, taxpayers will be paying for their own indoctrination.

“The line that once separated journalism from activism is being erased, and it’s happening with the eager co-operation of the mainstream journalism organisations that are lining up to take the state’s tainted money. We are witnessing the slow death of neutral, independent and credible journalism.”

This brief analysis exposes the extent to which the He Puapua agenda is undermining all of the four pillars of our democracy.

With Maori now over-represented in Parliament, and Labour’s Maori Caucus gaining control of its Executive wing, their radical influence in Cabinet is permeating throughout the government service, the judiciary, and even the media.

Fortunately, there is a growing public awareness of the radical agenda that is being put into effect. The groundswell is shifting, and people are finding their voice and courage. The accusation of “racist” are now blunt weapons against common sense, and those who were once cheerleaders for the Prime Minister are beginning to realise that Jacinda Ardern is the problem.

*To what extent is tribal co-governance a threat to New Zealand democracy?