Election Year – a quick glimpse ahead 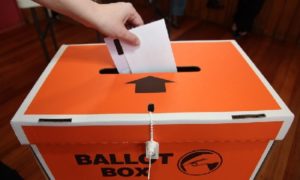 The 2020 general election will be held on Saturday September 19th. It will give New Zealanders the opportunity to vote, not only for those we want to govern the country for the next three years, but also on whether we want cannabis and euthanasia to be legalised.

While provisional election results will start coming through as soon as polling booths close at 7pm, the referenda results will not be released until October 2nd. Final results for the election and referenda will be declared on October 9th.

There are only 16 sitting weeks before the House rises on August 6th. Parliament will be dissolved on August 12th. After that, the incumbent government assumes a caretaker role until the new one is sworn in.

Overseas voting will begin on September 2nd, and advance voting – which is proving to be increasingly popular with 47 percent of votes at the last election cast ahead of polling day – starts on the 7th.

Under MMP, everyone has two votes – one for the party they would like to see govern New Zealand, and the other for the candidate to represent their electorate in Parliament.

As we know only too well after the Winston Peters “kingmaker” debacle at the last election, winning the most votes does not necessarily give a party the right to govern. Under MMP, it’s the party that can secure 61 votes in our 120 seat Parliament that has the right to form a government.

The months ahead are likely to be action-filled as political parties jockey to win our support. For Labour, the Greens and New Zealand First, the Budget, which is scheduled for Thursday May 14th, will be a key.

Election-year budgets provide the incumbent parties of government with a huge political advantage by allowing them to ‘bribe’ voters with billions of dollars of their own money – without it being counted as election-year ‘treating’!

The Prime Minister has promised Labour will run “a positive campaign, a factual campaign, a robust campaign”. However, some of the facts she is unlikely to dwell on can be found in Treasury’s Budget Policy Statement. Released on December 11th, it shows Labour is a poor manager of our economy. While they inherited what had been described as “rock star economy” – growing at one of the fastest rates in the OECD – since taking office, growth has declined.

While last year’s Budget forecast had the economy growing at 3 percent in 2020, that has now been downgraded to 2.2 percent.

Labour’s $12 billion infrastructure spending spree will increase net core crown debt to 21.5 percent of GDP in 2022, breaking Labour’s pledge to reduce debt to below 20 percent. As a result, a new debt target has been announced: net core crown debt must stay between 15 and 25 percent after 2022.

Unemployment is expected to be higher than the 4 percent forecast, rising to 4.3 percent – in spite of businesses crying out for new workers.

Housing has become the Government’s Achilles heel. Their 2017 flagship KiwiBuild policy of 100,000 affordable homes over 10 years has been a disaster. By December only 239 Kiwibuild houses had been built!

But it gets worse. Labour’s political attack on landlords has exacerbated the housing hardship that many families are now facing.

Their treatment of landlords can only be described as disgraceful. They are penalising them at every turn with expensive new requirements and draconian restrictions that will make it more difficult to manage their tenancies. They are driving many Mum and Dad investors out of the market, and as a result, they are forcing up rents.

This has led the waiting list for public housing to explode from the 5,800 Labour inherited in 2017 to 16,867, with tens of thousands more people homeless, accessing grants, and in emergency housing.

This week’s NZCPR Guest Commentator, retired economist Dr Edward Hudson, has been looking into the country’s housing affordability crisis and outlines the problem:

“The cause of high and rising house prices is basic economics – demand exceeds supply. In the short run, excess demand bids up prices. This is what has happened and continues. In the longer run, high prices will lead to an increase in supply, particularly in new construction. But we are not yet in a balanced demand-supply situation.”

Dr Hudson blames local councils and the Resource Management Act for restrictions in the supply of housing: “District plans and council actions restrict the supply of land for new building. Some councils will not allow division of larger rural land blocks into smaller, residential-sized blocks. The Resource Management Act also increases the cost of building as a result of all the hurdles that must be jumped before getting a consent to build.”

The simple fact is that the planning and consenting difficulties created by environmentalists have prevented the private sector from delivering affordable homes to the market.

If Labour had been serious about wanting to provide cheaper housing, they would have taken steps to rein in local authorities and to replace or significantly reform the Resource Management Act. They did neither.

It’s a dreadful situation where low income families can no longer get a foothold on the home ownership ladder, essentially because successive governments have allowed an unbridled bureaucracy to develop. Instead of addressing the problem, Labour has sidestepped it by ensuring its new housing authority has the power to override council plans and consenting laws. So with its own agency free to operate in a timely manner, it has turned a blind eye to this shocking policy failure that is killing the home ownership aspiration of so many young families.

Ironically, while the Government intends presenting another ‘wellbeing’ budget, sorting out this housing mess is not included. Instead, their election-year priorities include supporting the transition to a low-carbon economy, encouraging innovation, increasing Maori and Pacific incomes, reducing child poverty, and improving health outcomes. They will be hoping that this is a winning formula.

Two  polls released this month show the election will be a very tight race.

The February 13th TVNZ-Colmar Brunton poll had National on 46 percent, Labour on 41 percent, the Greens on 5 percent, New Zealand First on 3 percent, and ACT on 2 percent.

Under this scenario, National could win the Treasury benches with 61 seats compared to Labour and the Greens on 59 – as long National continues to support ACT leader David Seymour in holding onto his Epsom seat.

New Zealand First MP Shane Jones has announced he will stand in his home electorate of Northland – a seat currently held by National MP Matt King, but previously held by Winston Peters. If he won that seat, the Labour-Green-New Zealand First block would have the numbers to govern.

Under that scenario Labour and the Greens could form a Government with 62 seats, compared to National and ACT on 58.

As a result of the polls showing the Green Party vote is softening, their Campaign Director sent out an urgent e-mail plea for funding: “I won’t lie, the last two polls aren’t looking good for us. Last night’s poll marks the second in a row that indicate we are at risk of falling below the 5% threshold…”

New Zealand First, which is embroiled in a donations scandal, is in a worse position. Their plea for funding support, in which Winston Peters refers to journalists investigating irregularities over the New Zealand First Foundation as the ‘Media Party’, has Trump-style overtones: “New Zealand First has been under attack from the media in the last few weeks. The ‘Media Party’ have not liked it when we have told the truth about them, and we expect them to continue campaigning against us in the lead up to the election. We need a fighting fund to run campaigns that get our message direct to voters, rather than have the media filter everything we say… No matter how big or small, your donation will help us level the playing field against the ‘Media Party’, and continue fighting for hundreds of thousands of forgotten people like you. New Zealand First stands up for those who some in the media loathe and we make sure that your views are heard in Wellington. Help us beat the ‘Media Party’ & the liberal elite who have always opposed people like us.”

Meanwhile National is off to a flying start announcing policies it will introduce, as well regulations and laws it wants to repeal – all the while repeating the mantra that ‘this is a do-nothing, incompetent government and only National can get things done’.

National’s leader Simon Bridges used his address at Waitangi, to announce that the Maori seats should ‘eventually’ go – citing the 1986 Royal Commission which proposed that if the country adopted MMP, the Maori electorates should be abolished.

But his promise is insincere as he says that it is Maori themselves who should decide whether they are abolished: “We have more Maori in Parliament today than in a very long time under an MMP environment, but that doesn’t mean I’m going to impose that. You would need to see Maori voices realistically proposing that the time has come.”

He knows very well that this will never happen. It is disingenuous promises like this that explain why his rating as preferred Prime Minister is so far behind Jacinda Ardern.

In fact it’s a damning indictment that only a third of National voters prefer Simon Bridges as Prime Minister. This suggest voters are supporting National despite him. Imagine how much better the Party would do if voters actually liked the leader!

They’ve said no new taxes. They’ll shift transport investment back to roading, instead of buses, cycles and rail. They plan to raise the retirement age to 67 from 2037. And – yet again – they’ve promised to overhaul the Resource Management Act.

They’ve also pledged to “set a bonfire” to regulations so businesses “can thrive” instead of being “strangled by red tape”. Their plan is to scrap 100 regulations as well as a number of government policies if they are voted into power – including cancelling the regional fuel tax, and repealing the ban on oil and gas exploration.

National has also ruled out working with New Zealand First after the 2020 election. Their commitment to building a four-lane highway from Auckland to Whangarei is no doubt aimed at preventing New Zealand First from promising such a policy to win support in Northland.

Without a doubt Election 2020 will be extremely close – especially if the coronavirus outbreak becomes more serious, as incumbent governments will often gain support for the way in which they handle a crisis.

Winston Peters is again likely to be a key in determining the election outcome – but this time it will be whether or not his party returns to Parliament rather than choosing the Prime Minister.

*Do you think New Zealand First will be back in Parliament after the election?