John Bell is a former secondary teacher with grass-roots political experience including in the National Party and PPTA.

Getting out of our Comfort Zone 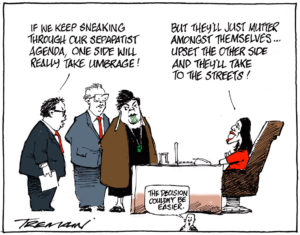 The great news of the past weeks is that He Puapua is now out in the open even if downplayed by the media and with mention of it dismissed as mere “politics” by the Prime Minister.    With both David Seymour and Judith Collins warning of this threat to our democratic system of government and way of life, it could be tempting, even comfortable, for concerned individuals to imagine that they can now leave to the political Opposition the task of resisting the separatist agenda.    Nothing could be further from reality.

Those who want to divide New Zealand and its institutions into separate camps – part Maori and “others” – have never had a more compliant Government under their influence and will not want National in particular to gain any traction in creating public unease over the agenda spelled out in He Puapua.

The prevailing public mood will be a critical factor in determining not only whether National and ACT can succeed in the 2023 election but also, in the event of their succeeding, how far and how fast they can roll back such developments as Maori Wards and a race-based health system.     With the entire apparatus of Government and most of the mainstream media currently enlisted in the cause of creating and maintaining public acceptance of co-governance, the task of impacting on the prevailing public mood is daunting.

While there is a place for analysis of events and for continuing to sign petitions and lodge submissions, such efforts make little if any impact on the prevailing public mood.     In a rousing article Tony Sayers called for ACTION in defence of our democracy.        His is a timely challenge.      Some of the actions Tony suggested will be  beyond the experience and comfort zone  of many readers;  indeed, things like turning backs to a speaker,  slow-clapping or foot-stamping a karakia at a school prize-giving,  are actions that most of us would usually condemn.     However, if we are to salvage our democracy, we have no option but to get out of our comfort zones and engage in protest by means that may not come easily to us.

For the past thirty or so years, I have at various times supported and/or been involved in the major groups that have formed with the aim of combatting iwi-led separatism.    None has succeeded in doing more than cause a temporary pause in the country’s somnolent slide into apartheid.     The success of the separatists and the ineffectiveness of those opposing them comes down to political methodology.

Without exception, pro-democracy / anti-separatist groups have directed their energies at persuading the Establishment to identify with and adopt their agenda.    For that is the method of which the people involved have had experience and with which they feel comfortable.    We believe that the better argument should prevail and to that end we have written submissions, articles and letters to countless editors, we have made speeches and we have published books.     By way of extreme action, some have gone to the length of spending significant sums of money on newspaper advertising and even holding public meetings.    And all the time, the Establishment was being captured by the separatists, so that now we have central Government and its entire apparatus, increasing sections of local government and most of the mainstream media advancing the separatists’ agenda, we find speakers like Don Brash and Bruce Moon being de-platformed, Stephen Franks warns that the legal profession is being infiltrated, and the entire Education sector appears, for us, to be a lost cause.

Right though one group may be about the status of Queen Victoria’s Charter, there is simply no point to pursuing the issue, for no-one who matters is taking the slightest notice.     Nor, as other groups hoped in the 2014 and 2017 elections, does the goal of having a minority party adopt our cause and then impose its agenda on National have any chance of success.    Even with National now openly taking a stand against the agenda in He Puapua     matters are now well beyond the point at which the separatists’ momentum may be halted and reversed simply by Government decree, for no Government in its right mind would want to stir up what John Key referred to as a “hikoi from Hell”.     In short, there is no simple, quick, one-off solution.

Our position is akin to that of workers absorbed into England’s “dark Satanic mills” during the industrial revolution.     Their employers had everything in their favour – the Government, the media, and the power to dictate both workers’ terms of employment and even living conditions.     As a social conscience over workers’ plight started to emerge, employers went through the motions of giving consideration to their demands while actually conceding as little as possible and also getting rid of the workers’ organisers.    New Zealand never experienced the worst of the struggle for workers’ rights, but, to some extent it was reflected in events at the South Island mining town of Blackball.     Finally, workers discovered the power of unity and the strike weapon; they learned to step outside the framework of options sanctioned and controlled by employers and discovered that, by stopping work in numbers, they were too many to be replaced and they could hurt the employer’s business.    That is a scenario that many readers may not like to contemplate, but it is one that we need to learn from.     What ended the industrial revolution’s exploitation of workers was not logic, not endless submissions to Establishment-controlled committees, but the weight of organised numbers.

Our cause is now in exactly the same plight as were workers at the time of the industrial revolution.     We have lost all influence in and with the Establishment; the only way we can advance our cause is through weight of numbers.

A strike can be a very destructive weapon which, if it drags on, inflicts great hurt on both employer and employee alike; in the end, everyone loses.     The best strikes are those organised by nurses and teachers who, merely by stopping work for one day can cause massive public inconvenience, and, if public relations are handled properly and they usually are, the Government gets the blame.     A strike should not be an end in itself; rather, it is a means whereby credibility is created for a cause     A demonstration of the reality that a lot of people are behind a cause usually results in favourable reporting of the cause in the media, and this brings pressure to bear on those who are the target of the action.

What the casual observer of a strike might not realise is how much work needs to go in to the task of stopping work with effect, especially if the strike also involves a mass rally.     I once had to co-ordinate the planning of a strike-day march by over 500 teachers the length of the main street in Timaru.     Of the 550 teachers in the PPTA Region that I led, a great many needed to come from as far away as Ashburton, Oamaru, Methven, Fairlie or Twizel, so a successful march along the main street of Timaru through four sets of traffic lights did not happen by accident.

Nor, I imagine, did the great Land March with Dame Whina Cooper symbolically out in front merely happen spontaneously, nor was Bastion Point or Ihumatao an accidental success for the organisers.      The separatist cause has been advanced by the very methodology that our side has yet to embrace – the recruiting and mobilising of significant numbers.

Tony Sayers’ article will hopefully have shocked readers into realising the need for direct action in defence of our democracy.     So pervasive is the separatists’ programme of indoctrination that the mere advancing of logic will have no effect on it.     Effective resistance will not, however, happen merely by accident.      Numbers need to be recruited and co-ordinated, actions need to be planned and consistent across the country.     Resistance to a karakia imposed on a school prize-giving in Gore will be meaningless unless it is matched by like resistance at similar functions across much of the country.

Even my suggestion of cleansing the charitable sector of the practice of using politically motivated and culturally inappropriate phrases in emails will need recruitment and co-ordination to be effective.      I thought I might have cured one organisation to which I annually donate over $700, but I see that there has been a relapse, and a communication accompanying my Tax Certificate ends Me te aroha me te whakawhetai which, I gather, has something to do with love and gratitude but, other than to advance a political agenda, what could possibly be the point of expressing this in  language that I do not understand and which then needs to be translated for me?       I would have thought that, at $700 a time, it would only take some five or six other child sponsors to promise to withdraw their support in the face of the politicising of the organisation, and the cost of this political activity would become too high so, clearly, such action has yet to occur.

Recently, the Taxpayers Union, which boasts over 60,000 adherents, called on its supporters to send in an endorsement of its submission on the Government’s plans for draconian action to combat the perceived “climate emergency”.    While the Taxpayers Union’s supporters produced around half of all submissions, it seemed that barely one in thirty of their supporters actually took the action requested.     Therein lies the biggest challenge that we face.

Increasingly we are coming to terms with the reality that ACTION will be needed to turn around the prevailing public mood; but that action cannot simply be left to someone else!    Effective action will not take place by chance; it will require the participation of significant numbers in effective, planned and co-ordinated initiatives.       Everyone – both concerned individuals and concerned organisations –   is going to have to move out of their comfort zone if sufficient numbers are to be recruited, readied and moved to take the kind of action that will make a difference to the prevailing public mood.    Only then may we expect ACT and National to make headway in blunting the drive to split our society into separate race-based camps.