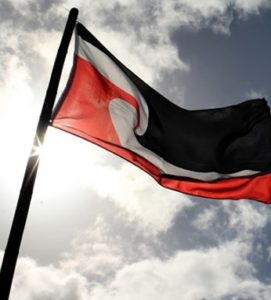 “The catch cry ‘democracy does not work for Maori’ has become the mantra for the destruction of democracy. Lenin would recognise what is being attempted in New Zealand in 2022, as would any self-respecting South American dictator. Quite simply we are witnessing a coup designed to dismantle our democracy and the Rule of Law and replace it with the worst form of tribalism coupled with the greed of those who want what they have not earned.”
– Anthony Willy, former Judge and Law Lecturer, June 2022

The rollout of the Government’s He Puapua plan to establish Maori sovereignty by 2040 is proceeding at breath taking speed. We are living in revolutionary times. It is a coup, by a small number of iwi elite who have their hands on the levers of power thanks to our Prime Minister’s willingness to sacrifice New Zealand democracy for totalitarian tribal rule.

Virtually every facet of our society is now subjected to their influence with their latest ‘conquest’, the legal system.

Before looking into the implications, let’s do a quick recap to put it all into perspective.

He Puapua was developed in 2019 by the Ardern Government under the guise of enacting the United Nations Declaration of the Rights of Indigenous Peoples.

While Labour’s Prime Minister Helen Clark had refused to sign the Declaration, because it didn’t fit with our Treaty settlement framework, National’s Prime Minister John Key – under pressure from his Maori Party coalition partner – signed in 2010. At the time he assured New Zealanders that the agreement was largely symbolic and not binding.

In fact, Article 46 of the Declaration confirms as much: “Nothing in this Declaration may be interpreted as implying for any state, people, group or person… any action which would dismember or impair totally or in part the territorial integrity or political unity of sovereign and independent states.”

After a careful examination of the Declaration, Anthony Willy concluded, “It is clear beyond doubt that in terms of the declaration no indigenous person can enjoy a right which damages the existence of a democratically elected government. That immediately rules out any notion of the governance of the state or territorial local authorities being shared between indigenous peoples and those who came after.”

This inconvenient fact has not stopped the Ardern Government and the self-serving Maori separatists within it from transferring democratic power from New Zealanders to the elite leaders of multi-million-dollar tribal business development corporations.

Replacing democracy with tribal rule is so extreme, that Jacinda Ardern knew she would lose the 2020 General Election if her plan became known. As a result, she kept He Puapua hidden from her New Zealand First coalition partner – and from the public – until after she had secured the power to govern alone.

None of the significant changes undermining democracy and our Kiwi way of life, that are being introduced through He Puapua have received a mandate from the public. The restructuring of health, polytechnics, and water services are all illegitimate policy changes designed to pass control to the tribal elite. None have public approval, and all should be repealed by the next government.

In this climate of division created by Jacinda Ardern, key institutions are being corrupted from their original purpose of serving all New Zealanders as equals, to prioritising and privileging those of Maori descent. Under her leadership, democracy is being replaced by apartheid.

One of the key constitutional changes identified as being necessary to achieve Maori sovereignty by 2040 is the inclusion of ‘tikanga’ – or Maori custom – in our common law. And last month’s Supreme Court decision in the Ellis case has essentially secured that goal.

Peter Ellis was convicted in 1993 of molesting children at a Christchurch crèche. He served a seven-year sentence but claimed his innocence throughout.

His ongoing attempts to quash the charges and clear his name led to two appeals to the Court of Appeal, two enquires by retired Judges, and in 2019, an application for special leave to appeal to the Supreme Court.

The leave was granted, but he died of cancer before the hearing could take place. His family and legal team wanted the case to clear his name to proceed.

The decision over whether a deceased person’s case should be allowed to continue centres on whether reputation survives death. Common sense tells us it does, and while such cases are unusual, they can nevertheless be argued under existing common law principles.

To digress for a moment – there are two main sources of law: statute laws passed by Parliament and ‘the common law’, which has been developed by judges over the centuries.

While the courts must apply statutes, they first need to interpret what they mean. If Parliament disagrees with their interpretation, the legislation may be amended to bring the courts’ interpretation back in line with Parliament’s intentions.

An important legal principle applied by the courts is that everyone is equal before the law, so the law can be applied ‘without fear or favour’. As stated on the Courts of New Zealand website, “Independent, fair and efficient courts are a cornerstone in our democracy. Courts underpin social stability. They give confidence that our rights as citizens can be upheld; that our differences and conflicts can be resolved through law; that those who interfere with our rights can be held to account; that our society can be protected from law breakers; and that the State can be required always to act lawfully.”

Independence is also required of members of the judiciary: ensuring no undue influence from other judges or politicians, and confining decisions to the facts of the case and matters of law, not opinion. Their independence prevents our judicial system from being corrupted – and helps maintain a high level of confidence in our legal system.

When the Supreme Court was asked to continue with the Peter Ellis case, instead of applying existing common law principles to the decision, three of the five judges –  Chief Justice Helen Winkelmann, former Waitangi Tribunal Chairman Joe Williams, and Susan Glazebrook – invited the legal teams arguing the case to consider whether ‘tikanga’ could be applied.

It was a bizarre request. Given Peter Ellis was not Maori, the use of ‘tikanga’ in the case would have been ruled out had the standard 1908 test for recognising custom been applied: “whether the custom exists as a general custom of Maori, whether it is contrary to statute law, and whether it is reasonable.”

Instead, in a split 3-2 decision, the case resulted in tikanga being extended to include non-Maori and the test dismissed as a “colonial relic” – leaving the door wide open for any court to apply tikanga in any case, in any way.

“This excursion into Maori customs raises a number of questions: What is ‘Tikanga?’ A search of the meaning of the word in the Maori dictionary yields fifteen possible definitions all of which amount to doing the right thing in the circumstances. None of the meanings have anything thing to do with the law as it has been understood and  practiced in New Zealand since 1840.

“Then there is the question of which maori custom to apply in a given case. The majority of the judges accepted that the pre 1840 maori customs to be applied in any case will be decided by experts called to assist the Court. This is quite a different exercise from the ordinary calling of experts to assist the court in deciding matters such as science, engineering, medicine and the like. These experts will it seems tell the court how it should decide the case – and the judge will be in no position to decide differently. Where then is the independence of the judiciary?

“One wonders if the three judges who have initiated these seismic changes considered the importance of the separation of powers between Parliament and the Courts which is crucial to the health of our democracy. And why go to the trouble of producing a judgment which can have no binding effect on the substantive determination of the appeal. Nothing said about ‘Tikanga’ is binding on any later Court. It is what the law refers to as ‘obiter dicta’ and we thank the judgments of O’Regan and Arnold JJ for pointing that out. The reason being because no part of this excursion into pre 1840 Maori cultural practices was relied on by the Court in deciding whether or not the evidence given against Peter Ellis at his trial was sufficient to allow the Jury to convict him.

“That said they have opened the door to future activist judges to rely on the obiter pronouncements in these judgments and to apply them in later cases. It is of the deepest concern to contemplate that two of the Judges on our highest Court: Winkelmann CJ and Glazebrook J. appear to have become swept up in the drive by the Maori caucus of the present government to implement their He Puapua policies before it is too late and they are ejected from office.”

By embracing tikanga, our highest court has now significantly altered the foundations of law in New Zealand – and consciously so. What’s more, in light of the disastrous outcome of introducing tikanga into National’s Marine and Coastal Area Act, their ruling will be to the detriment of the Rule of Law and society as a whole.

In fact, the inclusion of tikanga in that foreshore and seabed legislation has led the Courts to deliver an outcome that is the exact opposite of what Parliament intended.

Let me explain: When National – at the behest of the Maori Party – introduced the Marine and Coastal Area Act to repeal Crown ownership of the coast and allow tribal claims, they specified two tests in the law. Firstly, claimants had to have held their claimed area according to ‘tikanga’, and, secondly, they had to have held it ‘exclusively’ and ‘continuously’ since 1840.

Justice Churchman ruled that holding the area according to tikanga was sufficient to justify awarding title to the coast – notwithstanding that the law specified the property rights test should also apply.

The Edwards case, the first of almost 600 overlapping claims for the coast, will have a significant precedent effect.

The NZCPR is raising funds to appeal the Churchman decision to the Court of Appeal – if you would like to support our fight against this miscarriage of justice, please click HERE to help.

Tikanga is a vague hotchpotch of Maori rituals and culture, defined and redefined to suit any particular argument by so-called cultural advisors – whose word cannot be challenged by the courts.  As a result, including tikanga in our legal system is not justice, it is apartheid.

National has a growing list of things it will repeal should it become the government next year. Restoring the integrity of our legal system needs to be added to its list.

*Does ‘tikanga’ have a place in New Zealand law?