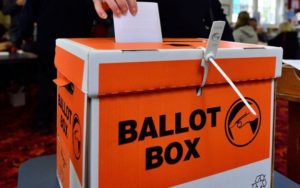 “There is one source of truth… and that’s the announcements we make here” – Chris Hipkins, Minister of Health, Beehive Press Conference 14 August.

On Monday, the Prime Minister announced that the General Election will be delayed for a month. It will now be held on Saturday 17th of October.

In her announcement she made the point, “COVID is continuing to disrupt life around the world. Pushing an election out by several months, for instance, does not lessen the risk of disruption. This will in part be the reason why many countries have held elections while managing COVID, including South Korea, Singapore and Poland.”

Far from being a source of truth, what the Prime Minister didn’t tell us is that more than 70 countries have postponed elections and referenda due to the pandemic!

The point is that in a democracy, elections should be free and fair. But if an incumbent government imposes a lockdown, with campaigning suspended and voters afraid to venture out from their homes, an election would be neither free nor fair.

A study about the impact of Covid-19 on elections by the International Institute for Democracy and Electoral Assistance (IDEA) warns against running elections during a pandemic: “Democratic elections should feature a wide political campaign and broad public debate on public policy issues, which may be curtailed if citizens are restricted from moving freely. Moreover, any election campaign may be dominated by the current pandemic, preventing a comprehensive discussion on wider public policy issues from taking place.”

This has certainly been the case in New Zealand, where our Prime Minister has even labelled 2020 the “Covid Election” in order to capitalise on her high public rating for handling the lockdown.

Other crucial issues, such as whether wealth taxes will be introduced and income taxes increased to repay the massive debt the Government has created, have all been side-lined.

In other words, by deliberately focussing the election campaign on the pandemic, the Government has suffocated any meaningful discussion of wider public policy issues.

It appears that the Prime Minister was planning to push ahead with a September election, until Winston Peters threatened to bring down the Government unless the election was delayed.

Political commentator Richard Harman explains what happened: “NZ First Leader Winston Peters has made public a letter saying he wants the Prime Minister to advise the Governor-General to delay the September 19 election to November 21 because of the restrictions that the current Covid-19 lockdown is placing on election campaigning… If the Prime Minister refuses a delay, then NZ First could advise the Governor-General that she no longer enjoys their confidence and should not, therefore, dissolve Parliament.”

It was this threat from New Zealand First that forced the Prime Minister to put fairness above political self-interest. But instead of pushing the election out until November, she chose October, no doubt in the hope of minimising negative publicity over border mismanagement.

“The most abject cockup of all was the failure to test workers at the border. Former Health Minister David Clark told the public weeks ago that border workers, including susceptible people such as bus drivers ferrying inbound airline passengers to isolation hotels, would be routinely tested. This seemed an obvious and fundamental precaution, but we now know it didn’t happen. Nearly two thirds of border workers – the people most likely to contract and spread the coronavirus in the community – were never tested. Some epidemiologists believe the Covid-19 virus was bubbling away undetected for weeks before the current resurgence.

“On one level this can be dismissed as simple incompetence, but it goes far beyond that. People might be willing to excuse incompetence up to a point, but they are not so ready – and neither should they be – to forgive spin, deception and dissembling. Misinformation can’t be blithely excused as a clumsy misstep, still less as “dissonance” (to use Bloomfield’s creative English). On the contrary, if misinformation is deliberate then it raises critical issues of trust and transparency.

“At a time of crisis, people are entitled to expect their leaders and officials to be truthful with them, especially when the public, in turn, is expected to play its part by making substantial social and economic sacrifices. If the government doesn’t uphold its side of this compact, it forfeits the right to demand that the public co-operate. That’s the situation in which we now appear to find ourselves. The bond of trust that united the government and the public in the fight against Covid-19 has been frayed to a point where it’s at risk of breaking.”

While the Director General of Health, the Minister of Health, and the Prime Minister all say that what has been happening at the border is not up to their expectations, Karl makes the point that it is not good enough that they are ducking for cover – they need to take responsibility and be publicly accountable for the failures.

As a result of the changed election date, the dissolution of Parliament is now scheduled for September 6.

September 13 will be Writ Day, when a formal direction will be issued to the Electoral Commission to hold the general election. It marks the beginning of the ‘election period’ – which ends at midnight on the eve of the election – when party-political election advertising can be broadcast.

Candidate nominations will now close on September 18, overseas voting will begin on September 30, and advance voting on October 3 – two weeks ahead of election day. At the last election 47 percent of votes were cast early, and with concerns about the virus being widespread, advance voting will be even more popular, with up to 60 percent of voters expected to vote early.

The Electoral Commission, which has planned for an election under Alert Level 2, will ensure that contact tracing occurs, that hand sanitiser is available, that physical distancing is possible in voting booths, and that staff can wear protective gear if necessary.

They also have plans in place for small scale ‘takeaway voting’ – for up to a maximum of 5,000 voters nationwide. It would involve delivering voting papers and then picking them up in communities of no more than 500 voters who have been placed under Alert Level 3 or 4.

There is also the normal postal voting option for voters who are unable to attend a polling booth through illness, age or disability. Applications for postal voting are now open but concerns are being raised that because the Prime Minister has opted to hold the election so close to the latest viral outbreak, not only could the postal service be overwhelmed, but there is also a growing potential for election fraud.

While the Prime Minister is adamant that the election will not be deferred again – no matter what happens regarding the virus – there is a safeguard. The Electoral Act contains a provision for the Chief Electoral Officer to delay the election for a week at a time – in the event that an outbreak makes it impossible to hold a free and fair election.

While the country is focussed on the virus, the economy, and the election, another important matter is being progressed – in a Rotorua Court.

The first of 202 pending applications to the High Court for the ownership and control of New Zealand’s coastline under the Marine and Coastal Area Act is now underway. It is the Edwards claim for a stretch of the Bay of Plenty coastline south of Whakatane from Ohope to Torere and out to the edge of the Territorial Sea.

Most of the claims were lodged with the High Court in 2017 on the eve of the seven-year deadline established by the Act. A further 358 applications were submitted to the Crown for direct negotiation. The Minister for Treaty Negotiations, Andrew Little, who is managing that process, recently released a draft timetable for dealing with those applications – he expects it will take 20 to 30 years for those claims to be resolved!

The Edwards case is important because it is likely to determine a number of crucial matters of principle regarding the claims process. To qualify for a customary title to the coast, the Act requires tribal applicants to prove they have had exclusive use and occupation of their claimed area without substantial interruption since 1840.

But since most of the coastal claims overlap with other claims, applicants are now seeking to re-define what is commonly understood to be ‘exclusive’, from the use of an area by one applicant group only, to the notion of ‘shared’ exclusivity whereby more than one tribal group can jointly claim control of the coast.

Since the Judge is expected to use this case to make a precedent-setting judicial determination regarding the ‘exclusive use and occupation’ test, the Landowners Coalition – a voluntary group representing the public interest – is pro-actively involved in the case as an interested party.

The Coalition, which is represented by the law firm of former MP Stephen Franks, opposes the concept of shared exclusivity. Their legal team is arguing that resolving claims under the Act is intensely factual, and requires the applicant group to prove they have satisfied all of the tests in the law, namely, that their use is ‘exclusive’, that they have ‘occupied’ the claimed area since 1840, and that there has been no ‘substantial interruption’ to their exclusive use.

With claimants having access to over $300,000 in taxpayer-funded assistance to prepare their cases, those opposing them in the public interest, like the Landowners Coalition, have to pay all of the costs themselves. That’s why the NZCPR is continuing to support the Coalition’s involvement in this important 8-week long case.

The law defines the coastal marine area as the distance between the average spring high tide waterline and the 12 nautical mile territorial limit – along with the airspace above, the water, and the subsoil, bedrock and mineral wealth below. It covers 10 million hectares of the richest natural resources in the country, equivalent to a third of the land area of New Zealand.

Claimants who succeed in gaining customary title to the coast will have rights akin to ownership, including the right to veto resource consents and conservation activities in their area, the right to charge commercial operators, the ability to impose a wahi tapu to restrict public access, and ownership rights to all non-nationalised minerals.

Staying with legal matters, a decision has now been released in another important High Court case – the challenge to the legality of the Government’s Alert Level 4 lockdown.

As political commentator Barry Soper explains, “Hats off to Andrew Borrowdale. He’s a Wellington lawyer – in fact he used to write laws for Parliament. He was so agitated about the lack of legal grunt behind the country being locked down on March 26 that he took a case to the High Court to challenge it – and he won…

“The High Court bench of three justices found that for the first nine days of the lockdown the Government’s requirement that Kiwis stay at home was justified – but unlawful. How you justify anything that’s unlawful is a little difficult to fathom. If you accept that, then surely it follows that a Government can act unlawfully, which… gives rise to anarchy or alternatively a dictatorship.”

So, there you have it. The first nine days of the lockdown breached New Zealand’s Bill of Rights – five million Kiwis were unlawfully detained in yet another case of Government incompetence, this time, on a massive scale!

*Do you agree with Minister Chris Hipkins that his Government is “the one source of truth”?