“The Envy of the World”?

On 3 June, Prime Minister Ardern told the House: “I have proudly made Captain’s Calls all the way through and it is one of the reasons, alongside our Team of Five Million, we are the envy of the world.”

Is New Zealand’s Covid-19 track record really the envy of the world? And did Ms Ardern’s Captain’s Calls improve or worsen the outcome?

With Parliament suspended during the crisis, the Prime Minister adroitly leveraged her celebrity status and thespian talent. Reality TV memes became unquestioned facts in the minds of both the captive populace and the star-struck media. We believed. And we stayed home for 49 days.

Weeks later, the media seems little interested in the alternative narrative that is only now taking shape. We are beginning to learn that –

The Ministry of Health describes border controls as the “key tool” for its Elimination Strategy, and this tool accounts for almost all of the case elimination in New Zealand since quarantine was belatedly introduced on 10 April. The “keep it out, stamp it out” policy of Alert Level 1 has 11 components, all of which are proportionate, effective, and relatively benign in economic terms.

Alert Level 2 also made sense during March, when the Ministry could not rule out the possibility of ‘community transmission’ (ie numerous untraced infections). Accordingly, a 30-day pause at Level 2 was the data-based recommendation by the Ministry of Health on 20 March – advice that was fully consistent with the Ministry’s widely-published pandemic plan.

The Prime Minister impulsively chose to disregard this official advice and instead leaped to the world’s most masochist restrictions (the Lockdown) with the resounding battle-cry of “go hard, go early”, and hang the expense! Political instincts and theatre easily trumped all the evidence-based science.

There was no cost-benefit analysis of any kind. The PM’s historic Captain’s Call was apparently influenced by alarming forecasts from three academic computer models – one from the Imperial College of London, one from Otago University, and one from Auckland University. In announcing her extreme Lockdown decision, Ms Ardern signalled that “the worst case scenario is simply intolerable”.

All three unvalidated models have since been thoroughly discredited by both peer reviews and real-world events. Neil Ferguson’s patchy record includes a long history of being wrong.

I have previously argued that the 49-day Lockdown (Levels 3 & 4) was the worst policy decision ever and almost surely resulted in a net loss of New Zealand lives. In retrospect, there is no evidence that our extreme Lockdown saved the life of a single New Zealander.

Economics Professor at Waikato University John Gibson has long taken an interest in this country’s policy response to the pandemic. In his recent research paper, “Government Mandated Lockdowns Do Not Reduce Covid-19 Deaths”, he finds that New Zealand suffered large economic costs for little benefits in terms of lives saved. Comparing hard data from comparable counties in USA, Gibson found strong statistical evidence that areas with lockdowns do not experience fewer deaths.

A comparative study of USA states produces a similar result. A comparison of European results by Oxford University has similarly found that there’s very little correlation between the severity of a nation’s restrictions and the curbing of excess fatalities[1].

A handy chronology of events is set out in Muriel Newman’s excellent article “The New Normal”. Dr Newman parses Professor Gibson’s research and asks why the PM needed to out-do Australia and the rest of the world.

The Otago modellers who helped to precipitate the Captain’s Call are now calling for a public enquiry, saying they have no idea which bans worked and which did not. While a Royal Commission is essential, it is already painfully clear that the bans that caused the most damage made the least contribution to the elimination strategy. Based on current evidence, my prediction is that the enquiry will find:

Calculation of the economic damage shares is straightforward. The Treasury’s scenarios were based on the assumption that alert level 4 lowered New Zealand’s economic activity (GDP) by 40%, level 3 by 25%, level 2 by 10-15% and level 1 by 5-10%.

Countries in most parts of the world have no reason to “envy” New Zealand’s Covid-19 results during Lockdown.

The Global Health Security Index which considers pandemic threats has just been published. Unfortunately NZ scores approximately half marks (54/100), coming in 35th in the world rankings – far behind Australia.

This poor result reflects badly on the actual delivery of measures like contact tracing, testing, border control and the Lockdown within New Zealand. Unlike Ms Ardern’s endless self-congratulatory comments, this objective assessment is both transparent and data-based.

The table below shows that New Zealand’s performance has been well below average in the Asia-Pacific Region that we inhabit (along with about one-third of the world’s population). We experienced 4 deaths per million of population, which is higher than the median figure for the Region. Our 301 cases per million was the highest of all the reported 20 countries in the Region, with the sole exception of Singapore.

By any relevant criterion, our public health delivery and results have been sub-standard.

As a direct result of the Captain’s Call for the world’s most stringent Lockdown, we have “inherited the wind” (Proverbs 11:29). Authoritative commentators predict that most counties’ economic damage and job losses will be largely proportional to the stringency of their respective pandemic responses.

In the second week of our Lockdown the International Monetary Fund forecast that the New Zealand economy would shrink by no less that 7.2% this fiscal year. Its Global Economic Report suggested that New Zealand will see the world’s biggest economic contraction outside Europe, except for Venezuela.

More recently, the OECD says the New Zealand lockdown had brought a number of sectors to a sudden stop in the three months to the end of June and it projected the country’s GDP would shrink by nearly 9%. It expects Australia’s economy to contract by only 5%. It is more pessimistic about New Zealand’s economic prospects than many other countries, because our Covid-19 responses were so much more extreme.

So, this calamitous Captain’s Call delivered rather ordinary public health results and a truly terrible economy. Can any thinking voter possibly believe that we are now “the envy of the world”?

[1] A measure of the overall number of deaths compared with normal trends. 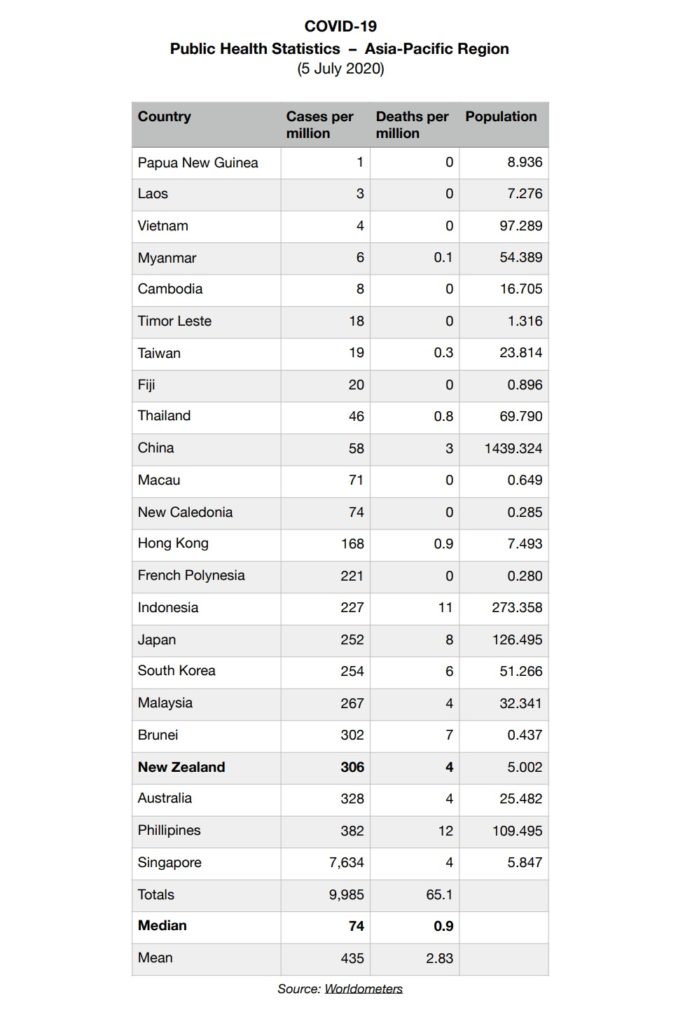