The Final Step to Separatism 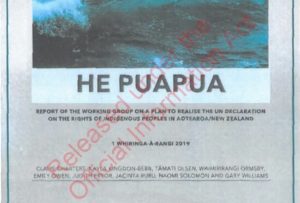 “The United Nations Indigenous Peoples Declaration… is the final step on the road to separatism. This is the road to Zimbabwe.”
– Winston Peters, 2011

A recent report produced by the Ministry for Maori Development outlining a plan for implementing the United Nations Declaration on the Rights of Indigenous Peoples, raises important questions: Is Jacinda Ardern governing on behalf of the people of New Zealand, or is she turning this county into an outpost of the UN?

Looking at her track record as Prime Minister, it certainly appears as if she’s being driven by the dictates of the UN. She admitted as much in a 2019 speech to the Bill Gates Foundation, when she described how she was enacting the UN’s Agenda 2030 in New Zealand: “We have incorporated the principles of the 2030 Agenda into our domestic policy-making in a way that we hope will drive system-level actions.”

At no time has she informed New Zealanders that Agenda 2030 is the blueprint for domestic policy.

Her Zero Carbon Act, which she boasted is world-leading in its severity, is being imposed to satisfy the UN’s Paris Agreement, even though it will have a disastrous impact on New Zealand’s living standards and way of life.

As if all of this wasn’t bad enough, we are now finding out that worse is still to come. The Prime Minister intends embedding the objectives of the highly controversial UN Declaration on the Rights of Indigenous Peoples into our legal and regulatory framework – a dreadful act of betrayal that will deliver control of New Zealand to the tribal elite in the final step to separatism.

To appreciate why this is regarded as treachery by so many New Zealanders, it is important understand the history.

The United Nations Declaration on the Rights of Indigenous Peoples, which was adopted by the General Assembly on 13 September 2007, consists of 46 non-binding, aspirational Articles. If implemented into law, they would confer special rights and privileges that would elevate tribal groups above all other citizens, giving them effective control of law-making, land and resources.

The 46 Articles can be viewed HERE.

The Declaration was deemed so radical that Prime Minister Helen Clark refused to sign. The advice from Crown Law was that four provisions in particular, were fundamentally incompatible with New Zealand’s constitutional and legal arrangements.

Rosemary Banks, New Zealand’s Permanent Representative to the UN, outlined these concerns to the General Assembly: “Article 26 states that indigenous peoples have a right to own, use, develop or control lands and territories that they have traditionally owned, occupied or used. For New Zealand, the entire country is potentially caught within the scope of the Article. The Article appears to require recognition of rights to lands now lawfully owned by other citizens, both indigenous and non-indigenous, and does not take into account the customs, traditions, and land tenure systems of the indigenous peoples concerned.

“In addition, the provisions on redress and compensation in Article 28, are unworkable in New Zealand. Again, the entire country would appear to fall within the scope of the Article and the text generally takes no account of the fact that land may now be occupied or owned legitimately by others or subject to numerous different, or overlapping, indigenous claims. It is impossible for the State in New Zealand to uphold a right to redress and provide compensation for value for the entire country.

“Finally, the Declaration implies that indigenous peoples have a right of veto over a democratic legislature and national resource management, in particular Articles 19 and 32(2). We strongly support the full and active engagement of indigenous peoples in democratic decision-making processes. We also have some of the most extensive consultation mechanisms in the world, where the principles of the Treaty of Waitangi are enshrined in resource management law. But these Articles imply different classes of citizenship, where indigenous have a right of veto that other groups or individuals do not have.”

At the time, New Zealand was one of four countries with extensive legislative frameworks already in place to deal with historic grievances, that opposed the Declaration. However, all were pressured to sign – Australia in 2009, New Zealand and the US in 2010, and Canada in 2016.

When Prime Minister John Key announced New Zealand had signed the Declaration, he described it as “symbolic and aspirational”.

In the Parliamentary debate that followed, the Minister of Justice Simon Power explained the limitations: “In moving to support the Declaration, New Zealand both affirms those rights and reaffirms the legal and constitutional frameworks that underpin New Zealand’s legal system. Those existing frameworks define the bounds of New Zealand’s engagement with the aspirational elements of the Declaration.”

Labour MP Nanaia Mahuta used her address to reiterate why they had opposed the Declaration: “It was with regret that in 2007 the Labour Government was unable to sign the declaration. In particular, there were inconsistencies between the text and New Zealand’s constitutional and legal framework that would be difficult to overturn while retaining the fabric of what our society is working towards.”

Fast forward to 2018, and Nanaia Mahuta, now the Minister of Maori Development, wants to enact the Declaration, even though she knows it is incompatible with our laws.

A Cabinet paper reveals that she is justifying her actions by claiming the National Government had already ‘authorised’ its implementation: “New Zealand has previously made commitments to take concrete measures to ensure the implementation and promotion of the Declaration [CAB Min (14) 17/5]… This commitment results from New Zealand’s acceptance of a Universal Periodic Review recommendation on the Declaration in 2014”.

Indeed, National had accepted recommendation 90 of the 2014 Universal Periodic Review, which urged the Government to “Take concrete measures to ensure the implementation and promotion of the United Nations Declaration on the Rights of Indigenous Peoples”. However, the accompanying caveat clearly stated that the mechanism to be used was the established Treaty of Waitangi claims process.

Minister Mahuta deliberately ignored the facts, implying instead that National had opened the door to the Declaration becoming law.

Their report, He Puapua was delivered to the Minister on 1 November 2019. A year later it was ‘partially’ released under the Official Information Act.

So what does the plan reveal?

The full implementation of the UN’s Indigenous Rights Declaration is expected to be completed by 2040 – to coincide with the 200th anniversary of the signing of the Treaty of Waitangi.

Since New Zealand’s current legal and constitutional frameworks are regarded as barriers to the full implementation of ‘Vision 2040’, there are plans to change them both.

Firstly, to make the legal system compatible with their plan, Maori tikanga – the range of cultural practices that evolved historically within the tribal feudal system – will be introduced into the common law, to ensure the law will mean whatever the separatists want. This is already being advocated by the Chief Justice and other Judges Labour has appointed, along with separatist supporters in academia and the media.

However, this week’s NZCPR Guest Commentator, the former Judge and law lecturer Anthony Willy, explains why incorporating tikanga will make it impossible to maintain the common law:

“To represent pre-European Maori practices as having a place in the common law of twenty first century New Zealand is absurd.

“A law which embraces the components of the beliefs of the various peoples who currently make up New Zealand society cannot by definition be a law common to all. The law is not concerned with making people feel better about themselves, or valued, it is the dispensation of impartial justice to an external standard of universal application.

“Judges of our superior courts who tinker with this populist nonsense are playing with fire: they do a grave disservice to the law, and the harmony of the society which it exists to serve.”

In reality, those seeking to introduce tikanga into the law are not motivated by the public good – they are instead committed to progressing Labour’s agenda to enrich the tribal elite.

The second barrier is our constitutional framework, but while New Zealanders overwhelmingly rejected a new constitution during the Maori Party’s 2011 review, it counts for nothing. A Treaty-based constitution is central to Vision 2040, and the path to its introduction is already mapped out.

By 2021, “The government will have initiated a public information campaign about our constitutional arrangements and set up a process for the Crown to determine how it should partner with Maori in a Treaty-based constitution”.

By 2025, a “constitutional convention” will have been held, and the Human Rights Commission will lead the campaign “to build alliances and shape the public conversation about constitutional arrangements”.

By 2035, the campaign will “frame the narrative and process for constitutional change with the wider public”.

And by 2040, a new constitution will be in place that will allow the government “to share power with Maori in our constitutional arrangements”.

With the goals outlined in Vision 2040 covering all aspects of life in New Zealand – we can only touch on a few of them here.

By 2040, there will be “an enlarged tribal estate” as a result of a significantly increased return of Crown lands, waters, and the foreshore and seabed to Maori ownership, the “acquisition of private land of significance to Maori”, and “customary title and rights in resources including water and minerals.”

The Waitangi Tribunal will be empowered by making their decisions binding.

Labour’s plan for the compulsory teaching of Maori history in schools is part of Vision 2040. As is the compulsory teaching of the Maori language in schools, and the enforcement of Maori culture: “All New Zealanders will embrace and respect Maori culture as an integral part of national identity, and this will also be reflected in a bicultural state sector.”

The new Maori Health Agency that is being established is part of Vision 2040, as is the on-going reduction in prison numbers: the objective is that by 2040 “prisons will not exist”.

When it comes to governance, they will “Establish… a joint deliberative forum to consider a range of constitutional matters, including new governance institutions (eg Upper House, Maori parliaments)” and they will “develop partnership/joint governance bodies across government agencies”, so “Maori decide whether and how they want to exercise rangatiratanga and authority to work towards equity – what services they want to take over”. In other words, separate systems designed for Maori, run by Maori, but funded by taxpayers.

By 2040, “All Maori will enjoy equity in opportunity and outcomes”, and “Maori will be thriving in all aspects of life including across generations”.

In essence, once a Treaty-based constitution is in place and tikanga is embedded in the common law, under Vision 2040 Maori separatists will control the country.

This is not pie in the sky. It is already underway.

There has been no public debate about the Declaration, nor was it mentioned in the Labour Party’s election manifesto.

The only information freely available about this UN plan to replace New Zealand democracy with tribal rule – and enact the biggest overhaul of public affairs this country has ever seen – was a general announcement by Minister Mahuta in 2019, and now, a year and a half later, the partial publication of a document revealing Jacinda Ardern’s dangerous intentions.

With only a third of the Agenda 2040 report being released, it appears that far more controversial recommendations are yet to be disclosed!

*Do you support Labour’s Vision 2040 plan to implement the United Nations Declaration on the Rights of Indigenous Peoples?
Note: Please feel free to use the poll comments to share your views on any of the issues raised in this week’s newsletter.