Tribal Control of the Coast 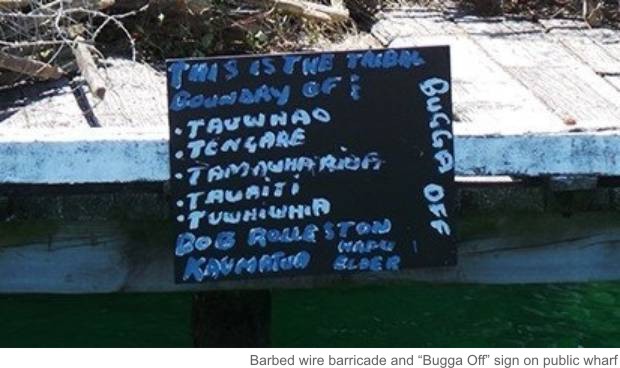 Earlier this month a public wharf on Matakana Island, off the Tauranga Coast, was blockaded with barbed wire and fence posts. A sign placed at the front of the Panepane wharf read, “This is the tribal boundary of Tauwhao, Te Ngare, Tamawhariua, Tauairi, and Tuwhiwhia.” It was in the name of “Bob Rolleston, Kaumatua, Hapu Elder”.

A tour boat operator who regularly visits the island called it an act of aggression. He said locals often shout “racist comments at people on board the boat. They call out horrible things to Indians and Chinese people as well as westerners. It’s very disrespectful towards everyone in Tauranga.”

His tour now bypasses the island.

The Western Bay of Plenty District Council cleared the blockade, but the next day it was rebuilt. It was again cleared and remains clear – at least at the time of writing. It seems tribal leaders realised that the protest action might jeopardise their negotiations with the Council for the ownership of the 200ha block of land that surrounds the Panepane Point wharf.

Under the proposed agreement, the transferred land would become a reserve, with access guaranteed, not only for the maintenance of harbour navigation aids, but also for the public.

But given that tribal members clearly want to keep visitors out, questions remain over whether they will honour the public access guarantee once they own the land – or whether the blockade will return, either as a physical barrier or as wahi tapu or rahui.

Matakana Island has always been a popular picnic spot, but the tribal members who want to block public access claim that visitors leave a mess.

Protecting the coastline from the impact of visitors is also being used to justify the widespread use of wahi tapu by tribal groups making claims under the Marine and Coastal Area Act.

They wanted to use wahi tapu to keep the public out of the area, not only to protect their ‘traditional’ customs and use, but to ensure visitors could not “pollute or litter or gut their fish onto the beach or into the water”.

They clearly did not want the public there at all – an attitude that appears to be widespread. Given the opportunity, there’s little doubt that some tribal groups want to use wahi tapu as a device to assert their authority and keep the public away from the coast.

In the Ngati Pahauwera case, former Minister Chris Finlayson declined wahi tapu protection under section 78 of the Act, pointing out that concerns relating to pollution or litter in the marine environment were the responsibility of the Regional Council, and could not be used to justify wahi tapu restrictions.

Future Ministers or Judges may be more lenient. Most of the applications for ownership of the coast that have been lodged with the High Court specify wahi tapu. If granted, substantial areas of our coastline will be ruled out of bounds to the public. But even if claimants don’t get official recognition of wahi tapu, there’s always rahui.

This week’s NZCPR Guest Commentator, Frank Newman, a columnist and former local body councillor, has been questioning the increasing use of rahui and the heavy handedness that often accompanies it. He explains:

“To place a rahui on something is to restrict or prohibit access – normally temporary to allow replenishment.  The essential issue here is that a rahui in itself has no legislative powers. It needs to be backed up by an Act of Parliament to confer the power of enforcement.”

Frank outlines a number of recent cases, but this month’s rahui at Cable Bay in Northland, imposed after a drowning, got nasty:

“Two days later the man’s wife took their young kids to play in the stream at the Bay, but were ordered by another man to leave. When the wife said they were only playing on the beach and not going into the sea, the man reportedly threatened to bring some more people to the beach to remove them. It was a bit of a scene – upset wife, upset kids, not nice.

“A spokesman from the local marae said, ‘…We have to put these rahui in place for protection of our culture…’

“But my response is since when did conforming to other people’s culture become compulsory? Why should those who don’t believe in spiritualism be forced to abide by the spiritual beliefs of others? Why it is now compulsory for those who are not Maori, or even Maori for that matter, to live by Maori culture?  The whole thing is an absurdity, yet it is becoming the norm.”

It is an absurdity but under the Marine and Coastal Area Act, the absurdity is going to become a whole lot more common as tribal owners of the coast use rahui to keep the public away – claiming environmental protection, of course, as the excuse.

So what are the chances that tribal groups will end up in control of large tracts of our coastline?

To answer that question we need to look at the number of claims and the statutory tests.

Prior to the 3rd of April 2017 six-year deadline for submitting claims, around 50 or so had been lodged across the two pathways specified in the Act – the High Court, and Crown Engagement with the Minister of Treaty Negotiations.

However, just before the deadline, another 580 claims were submitted – 200 to the High Court and 380 for Crown engagement. As could be expected, the large number of claims increases the chance that significant portions of the coast will go under tribal control.

But, the key factor is the statutory test: have claimants used the area exclusively and continuously from 1840 to the present day without substantial interruption.

Only one case has been resolved in the High Court. Judge Mallon stated in her Customary Marine Title finding, “The evidence that has been presented of exclusive use and occupation of the Tītī Islands by Rakiura Māori from 1840 without substantial interruption is overwhelming.”

She also explained, “This makes it unnecessary to consider in detail what may or may not constitute exclusive use and occupation without substantial interruption for the purposes of s 58 of the Act.”

In other words, there has been no judicial determination, as yet, regarding the meaning of “exclusive use”.

If a literal interpretation is made, that the applicant group can be the only group to use and occupy the specified area of coastline – apart from those involved in fishing and navigation, who are excluded under section 59 (3) of the Act – then only remote areas of the coastline would qualify for tribal control.

But on the other hand, if a lenient interpretation is made, then it is likely that claimants would succeed in gaining title to a significant proportion of the coast.

In the only case of Crown Engagement to be resolved by the former Minister, the leniency of his approach was so extreme that an urgent review of his decision should be undertaken by the new Government, lest it becomes the standard for the hundreds of new claims in the pipeline.

In that case, the Minister offered a Customary Marine Title to Ngati Pahauwera for an area of coastline that they claimed to have held “exclusively” since 1840, but which was used as the main route of travel and trade between the Hawke’s Bay and Gisborne for over 100 years.

By taking a lenient approach and ignoring historical facts in favour of tribal “oral history”, the former Minister has set a dangerous precedent that could see most of the coastline go under tribal control.

If that was to occur, what would it mean?

Under the Act, tribal owners of the coast would have many rights. These include the right of veto over all Resource Management Act applications and Conservation Department activities in their area, the right of ownership of all non-Crown minerals – including the right to mine and sell them – and the right to prohibit public access through wahi tapu and rahui. Claimants would also have the right to charge anyone using their area for business purposes.

The multitude of the other rights being sought, that can be seen in the High Court applications, includes wanting to ‘take’ and use all animal and plant life, including whales, dolphins, seals and penguins.

If you are concerned about these developments, what can be done?

The first priority is to encourage people to oppose the claims that have been lodged in the High Court, since without opposition the claims are more likely to succeed. That means registering a ‘Notice of Appearance’ with the High Court for each of the claims covering the areas of interest.

The problem is that most New Zealanders have no idea that their local beach has been claimed – many times over – by tribal groups, who, despite clear evidence to the contrary, are alleging that they have held the area “exclusively” since 1840.

When National was in government, they went to great pains to advertise in newspapers all around the country that the claims process was underway. Their advertising was targeted at tribal groups to encourage them to make claims and become engaged in the process.

The new Government should do the same, but this time the advertising should target all New Zealanders, inviting them to engage in the claims process. The public needs to know that their beaches are all being claimed and that they too can register and become involved.

But the second priority it to help raise the awareness of the new Government about the fact that the current claims process is denying New Zealanders their right to natural justice, by making it almost impossible to find out the detail of claims.

To be fair, the process that was put in place by the former Minister was probably adequate for a small number of claims. But it is completely inadequate for almost 600 claims and it urgently needs to be changed.

Accurate maps of the claims need to be posted on Government websites, along with all of the High Court claim applications, and clear instructions on how to find the information needed to register a Notice of Appearance.

We are writing to all of the Ministers involved – the Attorney General, David Parker, who is a party to all of the claims, the Minister of Treaty Negotiations, Andrew Little, who is responsible for the process and for deciding the 380 claims registered for Crown engagement, as well as Prime Minister Jacinda Ardern and Deputy Prime Minister Winston Peters – to point out that the system needs to be urgently overhauled if fairness and natural justice are to be restored.

If you share our concerns, we would urge you to do the same. MP email addresses can be found HERE.

I will leave the last word to Frank: “This issue is important. If you think access to beaches and harbours will remain freely available as they are now, then think again. It will be at the whim of the Maori owners whether there is a rahui in place and you too will be confronted by an individual saying, ‘Clear off…You can’t swim here, you can’t fish here, you can’t play on the beach, so get out of here’.”

Do you believe the coastal claims process as it stands is a barrier for those who wish to object to the claims?