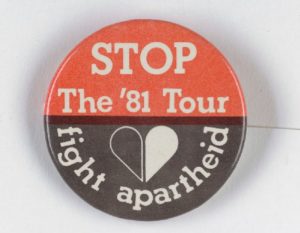 New Zealanders want to be united by the things that we have in common, not divided by our differences.

Next week is the 40th anniversary of the 1981 South African Springbok tour of New Zealand. The anniversary is a poignant reminder of an event that deeply divided our nation – and a sign of what may lie ahead.

On one side were the pro-tour supporters, who fervently believed sport and politics shouldn’t mix, while on the other side were opponents of apartheid, who thought South Africa should be banished from the sporting world until their separatist regime was ended.

In the largest civil disturbance in New Zealand since the 1951 waterfront dispute, more than 150,000 people took to the streets in growing opposition to sporting contact with a country that defined and divided people by race. More than 200 demonstrations took place in 28 centres around the country between 19 July and 13 September 1981.

Looking back, the Kiwi desire for national unity has always manifest itself in sport. Rugby was no exception. Introduced into New Zealand in 1870, it was quickly adopted as a national sport and source of national pride, with international matches beginning in the 1880s.

The first Springboks tour took place in New Zealand in 1921, and the first All Blacks tour of South Africa in 1928.

While a formal system of apartheid was not established in South Africa until 1948, the white minority government’s strict segregationist laws meant that mixed-race players had to be excluded from visiting sports teams.

Over the years opposition to New Zealand having sporting contact with South Africa grew, with demands there should be no more games with them until apartheid was abandoned. “No Maoris, No Tour” became a protest slogan, with CARE (Citizens’ Association for Racial Equality) and HART (Halt All Racist Tours) leading the opposition.

By the 1970s, the South African Government was forced to accept touring All Blacks teams would have Maori players. They were declared ‘honorary whites’.

But a planned visit by the Springboks to New Zealand in 1973 threatened such nationwide disruption – with HART and CARE on one side and the pro-tour group WARD (War Against Recreational Disruption) on the other – that Prime Minister Norman Kirk cancelled the tour.

However, in 1981, with an election looming, Prime Minister Rob Muldoon invited the Springboks back and for two months New Zealand became a nation at war with itself.

This week’s NZCPR Guest Commentator is Ross Meurant, a former Member of Parliament and Police Inspector, who at that time was seconded to second in command of the Police’s Red Escort Group – an elite squad established by Prime Minister Muldoon to protect the Springboks during the tour.

The 51 members of the Red Squad were trained at the Papakura Military SAS training facility. Along with the Blue Squad – a sister group from Wellington – they were instructed in the latest protest strategies and readied to escort the Springbok team.

Ironically, while Ross stood against the apartheid protestors back then, he is now standing against apartheid in New Zealand:

“Today, in my assessment, the Government is heralding the introduction of Apartheid to New Zealand. In 1981 I was one who literally fought to protect the rights of Kiwis who wanted to exercise their lawful right to attend rugby games and not have their travel disrupted by protestors who disregarded the rights of fellow Kiwis in their quest to fight Apartheid in another country. Today, I find myself in a role not dissimilar to that of John Minto 1981. Difference is: I stand against Apartheid in New Zealand…

“In my assessment, what Labour are doing, is tantamount to imposing a form of Apartheid by elevating Maori above The Rest of New Zealand. That will generate animosity and hostility. At what stage does this become a recipe for civil war.”

It is a valid question.

By deliberately pursuing a separatist agenda with the intent of elevating the tribal elite to the status of a ruling class, Prime Minister Jacinda Ardern is surely no better than those misguided rulers in South Africa.

Not since the Muldoon era has New Zealand had such a divisive government.

The He Puapua report, which was commissioned by the Ardern Government under the guise of developing a strategy to enact the United Nations Declaration on the Rights of Indigenous Peoples, defines the pathway to achieve Maori sovereignty by 2040. Parts of the plan have already been put into effect, making a nonsense of Jacinda Ardern’s spin that the report was simply advisory. He Puapua is already dividing our country by race. Elevating one race above another is racist and will lead to apartheid.

Not only is this racist co-governance agenda being imposed in secret – without any public mandate – but it is predicated on assumptions that do not stand up to scrutiny.

For instance, their claim that Maori are ‘indigenous’ to New Zealand is simply not true – Maori are migrants, like everyone else who arrived from another country.

As law lecturer and Treaty expert David Round explains: “The Oxford English Dictionary tells us that someone indigenous is ‘born naturally in a land or region; native to that region’. In that sense, all native-born New Zealanders are indigenous. We may speak a language and have a culture that developed elsewhere; but so did the first Maori when they arrived from the Hawaiki they still remember. On the other hand, if ‘indigenous’ is used to refer to a people whose ancestors have lived in a place from time immemorial, then New Zealand has no indigenous inhabitants.”

In fact, in 2002, the majority view of archaeologists was that humans first settled in New Zealand well over 1,000 years before the main Maori migration is estimated to have arrived around 1200 AD. Based on the forensic examination of historic plant and animal remains, they concluded that the settlement of New Zealand was a continuous process.

This of course raises a key question: why on earth is the Government even trying to enact the UN Indigenous Rights Declaration when no-one in New Zealand is indigenous?

Even claims that the Treaty of Waitangi is New Zealand’s ‘founding document’ are problematic.

When the Treaty was signed on the 6th of February 1840, New Zealand was still part of New South Wales. It was not until a Letters Patent was signed by Queen Victoria on the 16th of November 1840, that New Zealand become a nation in its own right.

If anything is to be called a founding document, surely it should be the one that created New Zealand as an independent British colony – namely Queen Victoria’s Royal Charter of 1840.

Then we come to the Treaty of Waitangi itself. It was a simple contract between Queen Victoria and 512 Maori chiefs that established the Queen as our sovereign, protected private property rights, and gave Maori the same rights and privileges of British citizenship as every other New Zealander.

The former Government Minister Sir Apirana Ngata described life back then: “the lawlessness… of cannibal times, of illiterate days… when the Maori tribes were fighting fiercely among themselves”. With no unified chiefly authority to sign on behalf of all Maori, the Treaty of Waitangi could not be recognised at international law, since that status only applies to treaties made between two sovereign powers.

That’s why the Treaty was described by the former Attorney General and Chief Justice Sir James Prendergast as a “nullity” in his 1877 judgement of Wi Parata v Bishop of Wellington: “The title of the Crown to the territory of New Zealand was acquired by discovery and priority of occupation, the territory being inhabited only by savages. The Treaty of Waitangi, so far as it purported to cede the sovereignty of these islands, was a nullity.”

Furthermore, in response to activist claims that the Treaty represents a ‘partnership’ between Maori and the Crown, former Judge Anthony Willy clarifies the situation: “It was and is constitutionally impossible for the Crown to enter into a partnership with her subjects. She can as she did in 1840 make promises to them but by definition, the Crown is supreme, and the people are subject to her laws.”

In spite of claims of a partnership having no legal foundation, it has not stopped those pushing the sovereignty agenda from misrepresenting the situation and continuing to use the partnership fiction to justify their demands for power.

Then there’s the fallacy of ‘Maori’ disadvantage, that underpins calls by tribal leaders for race-based control of social services.

While Dr Chapple concludes ‘race’ does not explain socio-economic failure, he warns that race-based policies are being used to enrich the Maori elite: “Broad based policies which target the Maori population, which may be thought to close the gaps (such as fisheries settlements, other treaty settlements, cheap access to the radio spectrum etc.), risk being captured by the considerable number of Maori who already have jobs, skills, high incomes and good prospects”.

The question of who is Maori is also problematic. Rapid intermarriage from the time of arrival of the first settlers blurred racial lines to the point where those able to qualify as ‘Maori’ – with 50 percent or more of Maori blood – began dropping to critical levels.

As a result, the Labour Government changed the law: under the 1974 Maori Affairs Amendment Act anyone with a Maori ancestor – no matter how distant – can be “officially” defined as ‘Maori’. This highlights the farce of racial categorisation.

As David Round explains, “Virtually all Maoris are of mixed Maori and European descent. We hear of the alleged ‘browning’ of New Zealand; it would be just as accurate to speak of its whitening, as the races continue to intermarry and become one people. People who are even only one eighth or one sixteenth Maori cannot in any meaningful sense be described as Maori. Genetically they are not. Any injustice suffered by their Maori ancestors may very well be balanced by the benefit accruing to their European ancestors. The mere fact that one of a claimant’s great-great-ancestors suffered a wrong is no proof at all that this claimant has ever suffered in his or her own life. It is actually an injustice to the rest of the community to give special benefits to those who have not suffered injustices.”

If New Zealand continues down the present path set out by Jacinda Ardern, New Zealand will increasingly become an apartheid nation, where race determines our future – and those claiming Maori heritage are given superior rights over everyone else.

On the basis of false assumptions and fabrications, democracy will be sacrificed, and New Zealand will return to tribal rule.

Professor Elizabeth Rata of Auckland University has argued that to stop the slide and restore democracy all references to the principles of the Treaty of Waitangi should be removed from legislation.

We believe that all references to race should also be removed from legislation to eliminate the dangerous practice of granting privilege according to skin colour – and to ensure that all New Zealanders are treated equally.

That’s what Europe did after a war which saw race used as a deadly weapon. Its why most European countries have adopted a colour-blind approach and have removed all references to race from their Statute books.

The reality is, there are only two ways forward for this country: One is the Prime Minister’s path towards apartheid and division, and the other is unity.

I know which one I would choose – what about you?

*Do you believe the Ardern government is taking New Zealand down the path of unity or division?