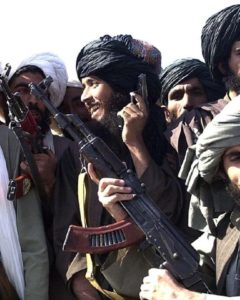 “The last American to leave Kabul won’t have to turn off the lights because there has not been any for some years now. It flickered occasionally… But by and large, Afghanistan descended into the dark ages of tribalism, where it has been largely rooted, many decades ago. Tons of Soviet hardware or a trillion American dollars was not going to rescue it. Nothing will.”
– Chidanand Rajghatta, The Times of India’s US-based Foreign Editor, August 16, 2021.

The world has watched on with disbelief over recent weeks as the Taliban regained control of Afghanistan – with little or no resistance. Having battled both the Soviets and the US over many decades, their latest move came as a result of the rapid withdrawal of the US and other Western allies over recent months. Facing limited resistance and supported by Pashtun tribes in the south and east, Taliban fighters swept across the country and into Kabul.

As a young soldier-journalist fighting tribal insurrections on the Afghan-Pakistan border in the 1890s, the former British Prime Minister Winston Churchill described the forebears of those Pashtun Taliban supporters in his 1930’s book My Early Life: “The Pashan tribes are always engaged in private or public war. Every man is a warrior, a politician and a theologian. Every large house is a real feudal fortress… Every family cultivates its vendetta; every clan, its feud…. Nothing is ever forgotten and very few debts are left unpaid.”

They banned non-Islamic music and television, statues and other symbols considered blasphemous were destroyed, and religious courts imposed inhuman corporal punishment including chopping off the hands of thieves, flogging lawbreakers, and stoning adulterers to death.

While the new regime say they will accommodate women’s and minority rights, they also warn that new laws will need to reflect their cultural traditions and religious rules. Others simply say the Taliban should be judged by their past actions.

How it all plays out remains to be seen, but the reality is Afghanistan is deeply tribal and deeply divided. It has a long history of clan warfare dating back thousands of years, and those divisions remain today. Afghanistan and other such countries are a reminder of how destructive tribalism can be. It is no coincidence that the nations with the highest standard of living are by and large unified.

Despite this reality, empowering division in New Zealand appears to be the committed objective of Jacinda Ardern’s Labour Government. This has been revealed in He Puapua – a blueprint devised in 2019 under the guise of enacting the United Nations Declaration of the Rights of Indigenous Peoples that would deliver tribal rule by 2040.

Although the Government claims He Puapua is simply a discussion document, its radical objectives are being enacted at pace.

So while the people of Afghanistan are being forced to accept the cultural traditions and religious rules of the Taliban extremist minority at the point of a gun, in New Zealand the extremist minority are exercising their influence through Parliament – but without a public mandate to do so.

Jacinda Ardern received He Puapua in late 2019, but kept it hidden so well, that even Deputy Prime Minister Winston Peters knew nothing about it. The New Zealand First Leader was kept totally in the dark – even as He Puapua policies were being enacted by stealth.

Furthermore, Jacinda Ardern deliberately betrayed New Zealand by keeping He Puapua hidden during the election campaign, especially as she knew it would have a profound impact on New Zealand once she returned to power.

In spite of having a majority to govern alone, Prime Minister Ardern has no mandate for He Puapua. She has no mandate to assume that the Crown is in an equal partnership with Maori that gives tribes a 50 percent interest in our resources and the decision-making powers.

The whole ‘partnership’ concept that underpins He Puapua is based on deceit – as the former Judge and law lecturer Anthony Willy has explained: “It was and is constitutionally impossible for the Crown to enter into a partnership with her subjects. She can as she did in 1840 make promises to them but by definition, the Crown is supreme, and the people are subject to her laws.”

Furthermore, the partnership concept fails the ‘reality’ test – who in their right mind could imagine Queen Victoria agreeing to partner with 500 warring chiefs?

The website of the Government’s Office of Maori Crown Relations clarifies the ‘end game’ of this bogus He Puapua ‘partnership’ in the advice it provides to Crown agencies.

It states that establishing a “partnership framework” will involve the “sharing” of government “power and resources” with Maori, and concludes: “Māori decide and the Crown assists in implementing the decision made by Māori.”

If anyone thinks this 50:50 partnership arrangement is going to end well, they should reflect on what is happening on the West Coast, where a stoush has now developed over a Department of Conservation plan for a new visitor centre at Punakaiki.

In 2018 DoC applied to the Provincial Growth Fund for their Dolomite Point project, with a proposal that provided space for Ngai Tahu to operate a visitor attraction within the new centre. The application was successful and DoC received $25.6 million for the project.

However, since then and consistent with the enhanced He Puapua ‘partnership’ aims, it is now proposed that Ngai Tahu will be gifted the $25.6m centre on completion, and DoC will rent space for its visitor services.

The centre itself would be run as a for-profit commercial operation for the benefit of Ngai Tahu.

When the local Conservation Board was asked why the building was being vested in Ngai Tahu, a Ngai Tahi appointed Board member, Kara Edwards, said, “This is an example of a Treaty Partnership in action. It’s offensive to suggest otherwise and I’m not having it”.

According to the DoC West Coast director, Mark Davies, “The facility would be an ‘exemplar’ of DoC and Ngai Tahu working together in a Treaty partnership”.

So, here’s the deal. DoC, via the taxpayer-funded Provincial Fund, receives $25.6m for a building. DoC and taxpayers then give that building to Maori and lease back some of the building that they have just gifted.

Is this what Jacinda Ardern understands by partnership? Is this the template for future arrangements with Maori? This is not being done in the context of a Treaty settlement, it’s being done under He Puapua.

But let’s be honest. This is not about “partnership” – it’s about money. And it’s not like Ngai Tahu is impoverished – it is a multi-billion-dollar corporation!

Is He Puapua our future? It seems so.

Government departments are now not only being rebranded using Maori names, but their core purpose is being redirected to He Puapua goals.

As political commentator Frank Newman recently noted in response to a report that the housing agency Kainga Ora (previously known as Housing Corp) was defending spending $30,000 on a Maori carving by claiming that Maori culture is their priority: “The main principle of the Housing Corp used to be housing people in need. It is now clear that the main principle of Kāinga Ora is recognising Māori culture and traditions. Kāinga Ora should change its name back to what it was and get back to doing what it used to do.”

In the best totalitarian tradition, He Puapua Treaty partners are forcing their culture onto the State sector through compulsory training courses encompassing the separatist agenda of the Maori sovereignty movement. And it’s not just the core public service either – everyone in ‘official’ positions is being targeted including teachers, children, school board trustees, doctors, nurses, firefighters and other emergency service volunteers, Police, military, and local authority employees.

The scale and speed of this cultural takeover is breath-taking.

And of course, the radicals who stand to profit most from their new found partnership status, are very quick to condemn those who dare challenge their legitimacy. We saw this recently when seven University Professors were subjected to a vicious and orchestrated attack for raising valid concerns about Maori mythology and culture being described as “science” in the education curriculum.

Just as the Three Waters reforms are a means of delivering the He Puapua goal of control of water to Maori, is the Government’s health reforms being undertaken for the same purpose?

Is community involvement in health through the District Health Boards being abolished simply because that model doesn’t fit the 50:50 He Puapua goal of Maori control of health services?

Is that why two new centralised heath bureaucracies are being planned – a Health NZ agency and a Maori Health Authority – with the Maori Authority being given the power of veto over the entire health system?

Journalist Graham Adams has been investigating these health proposals and explains, “There has already been much debate about whether the alleged inefficiencies of the existing bureaucracy can be cured by the creation of another, centralised bureaucracy – especially as it will include co-commissioning bodies in the form of the Maori Health Authority and Health NZ that will work in partnership to deliver health care across New Zealand. Within that debate, one of the most explosive issues is undoubtedly going to be the question of a right of veto. It’s impossible not to conclude that… a health authority representing roughly 16 percent of the population having the right to nix the plans for the remaining 84 percent is likely to create the mother of all political firestorms…”

Graham notes the other inflammatory question relates to funding. While it has been suggested that Maori Health Authority funding should be in the region of 16 percent of the total health budget, in proportion to the Maori population, how long will it be before Maori leaders start calling for 50 percent of the health budget – citing their Treaty partnership as justification?

Not only is the notion of a Treaty “partnership” a fabrication, but so too is the myth being used to drive this He Puapua agenda, that colonisation and institutional racism within government agencies has created widespread Maori disparity.

This week’s NZCPR Guest Commentator, social policy analyst Lindsay Mitchell, has undertaken a comprehensive investigation into the progress of Maori under colonisation. Despite the claims that Maori are worse off, Lindsay found otherwise:

“The over-riding theme from those academics, politicians and public servants currently holding sway is that colonization was and is a negative experience for Māori. Poor outcomes are given as concrete and conclusive evidence… this is simply not the case for most Māori. Their living standards have improved enormously, as has equality of opportunity… The progress of Māori social and economic indicators that has occurred under the process of colonization stands in stark contrast to the constant barrage of contrary claims.”

Lindsay’s research shows claims that Maori disparity is growing to such an extent that tribal agencies need to replace State services, is not credible. Yet such misrepresentations are commonly used to justify He Puapua – and redirect democratic rights and public resources to tribal control.

So as the world watches on in disbelief as Afghanistan’s fragile democracy is being captured by extremists, many New Zealanders are now watching the damage to our democracy with disbelief.

The reality is that no nation has ever prospered by dividing its people, and it is hugely destructive of Jacinda Ardern and her Parliamentary colleagues to pretend otherwise.

*Do you agree that the $26.5m visitor centre at Dolomite Point should be gifted to Ngai Tahu?